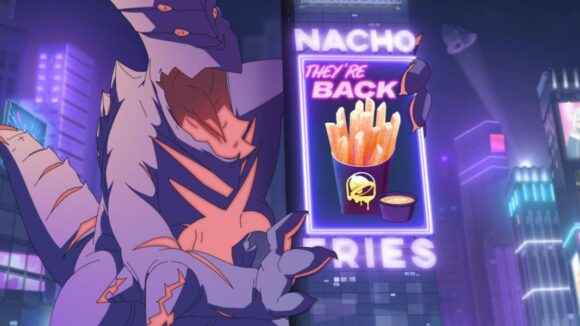 The Tokyo Olympics have coincided with one of Taco Bell’s periodic revivals of Nacho Fries. The result: Fry Force, a screwball commercial for the chain’s Mexican-inspired fries done as a note-perfect anime parody.

The ad, which premiered during the Olympics’ opening ceremony, evokes mecha-vs-monsters anime classics like the Evangelion and Gundam franchises. Rei and her band of resistance fighters are pitted against kaiju that have come to devour said fries. Cue plenty of cheesy (pun intended) gags: “I’m getting fried here!” cries Rei when she finds herself in a tight spot. Watch it below:

Since launching in 2018, Nacho Fries have come on and off the market at regular intervals. Each limited run has been heralded by a playful commercial that riffs on a film genre, from the musician biopic to the Fast & Furious series.

The ad’s narrative universe has already been extended via a short tie-in manga published by Taco Bell. Some viewers are hungry for more:

That Taco Bell commercial with the anime has no business being that damn good. I wanna see the full episode of Fry Force now.

This is literally the BEST Taco Bell commercial I have ever seen! 10/10 would watch the Catsuka- Fry Force anime! pic.twitter.com/mkHXGDpKwp