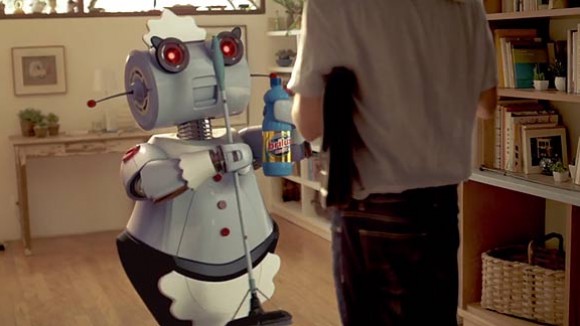 A new series of ads for Brilux cleaning supplies resurrects Hanna-Barbera’s Rosie the Robot in CGI. The character is removed from her futuristic context on The Jetsons and dropped into a contemporary scene of Brazilian upper class domesticity.

It’s less a question of whether it’s well done or not, and more a question of why. Sure, there was some novelty value a decade ago when computer animated versions of drawn cartoon characters were all the rage. But do audiences still find this type of thing interesting or do creatively bankrupt ad agencies keep shoving it down our throats because they can’t come up with anything better? When you’re scraping the bottom of the barrel with Rosie the Robot and Charlie the Tuna, it might be time to come up with a new idea.

UPDATED: The creative director of the campaign, Aliwton Carvalho, has provided some valuable background info on the spots:

The story is less about Rosie or The Jetsons and more about the social revolution happening right now in Brazil. A year ago, a constitutional amendment, which extended the country domestic workers’ rights, was approved by the Parliament, causing middle class to increase participation in performing the household tasks themselves, just like it happens at more developed countries. So the main subject here is the concept and the discussion we’re trying to fuel and sponsor. So we wanted realism. At first we even considered creating a new, generic robot. Later we opted for Rosie because her personality fits the campaign speech beautifully. And, I’m sorry for that, but we also thought it would be fun to reimagine Rosie as a real thing. 😉