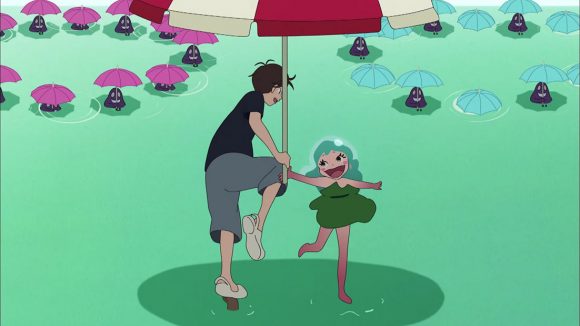 Japanese auteur Masaaki Yuasa (Mind Game, Ping Pong, The Tatami Galaxy) directed not one, but two animated features that will be released in spring 2017. The newly announced Lu Over the Wall (Yoake Tsugeru Lu no Uta) released a trailer this week:

The film’s story, according to Crunchyroll, “follows the encounter and relationship between a junior high school boy Kai who lives in a fishing port town and Lu, a mermaid girl comes from the sea.”

Yuasa’s own studio Science Saru, which he runs with Eunyoung Choi, produced the film. Lu Over the Wall will be released by Toho Animation in Japan on May 19, 2017, just a little over one month after the debut of Yuasa’s other upcoming feature, Night is Short, Walk On Girl.

Yuasa will surely have something to say about these films when he appears in March as a special guest at the GLAS Animation Festival in Berkeley, California.