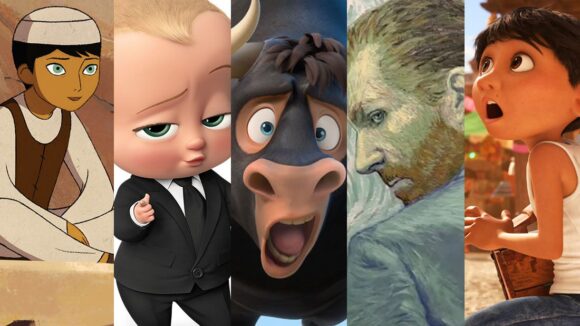 A highly competitive awards season moved one step closer toward its conclusion with this morning’s announcement of the nominees for the 90th Academy Awards.

We have published filmmaker reactions from the nominees here. A full analysis of the animation and vfx categories is posted below.

Let’s take a look at the nominees. They are:

Notes on the Animated Feature Film Nominees:
At the risk of sounding like a broken record, it has to be pointed out that no Oscar category has been so controlled by one film studio as the animated feature award has been by the Walt Disney Company, which has won the Academy Award for nine out of the last ten years. But even though we already know that this year’s Disney nominee, Coco, will win the award, it’s worth discussing the category for other reasons.

Firstly, the two independent European features – The Breadwinner and Loving Vincent – are notable, both for being mature films that explore topics rarely explored in mainstream animation, and for having women directors. As Loving Vincent co-director Dorota Kobiela pointed out in her reaction to the nomination, just 4 of the 72 previously-nominated directors in this category have been women. Two in one year is a record for the category, and an important milestone worth acknowledging as the animation industry works to incorporate more voices and expand the range the stories that can be told using the medium.

Then, we have the two other nominees – Dreamworks Animation’s The Boss Baby and Blue Sky Studio’s Ferdinand. Loads of people were confused by these nominations, since there was a general lack of passion and interest surrounding the films and the fact that neither had attempted anything cinematically remarkable. The nominations of these two films were even more surprising considering that this was one of the strongest years ever for the category. Just look at the films these two were up against:

Amongst movie critics, The Boss Baby had only 52% positive reviews on Rotten Tomatoes and Ferdinand had 70% positive. Both of those are outliers in the animated feature Oscar category. The last time an animated film with a 70% or lower RT score was nominated was 13 years ago, when Shark Tale managed a nod with only 35% positive reviews. In fact, in the entire history of the award, only three other nominees besides Shark Tale have had critical reviews below the 70% threshold, and all of those were in the early years of the category, when there were far fewer quality contenders.

Therefore, it seems highly unusual that the Academy would nominate not only one, but two lowly reviewed films in the same year, especially when the nominees over the past two years had all enjoyed critical reviews over 90%. (And just imagine the uproar if the Academy had nominated a film with a 52% positive review rating for best picture; the lowest-rated best picture Oscar nominee this year is Darkest Hour at 86%.)

There’s a simple reason for this result though, and it’s because the Academy re-engineered the voting rules for the category this year, which we first reported last April. At the time, we suggested that weaker studio films could benefit from the new rules, and that fear has now been realized.

I spoke to an Academy member this morning, and the member believes that the culprit for the skewed results wasn’t that the Academy opened up the nomination committee more widely to all Academy members (previously, a smaller percentage of members outside of the Short Films and Feature Animation Branch were allowed to vote for the nominees), but rather the new preferential balloting system.

Each member, this person said, was assigned to watch a certain number of films (less than 10 of the 26 eligible features) and then they had to rank their top five choices. But here’s where it gets weird. In addition to the films they were assigned to watch, they also had to choose four other animated films and consider those in their pool. Keep in mind, the Academy members already had to watch around 10 films, so they may have not wished to choose four additional films to watch on top of those. This means there’s a good chance that they’d simply choose mainstream commercial releases that they’d seen at some point earlier in the year, giving the advantage to big studio films.

What’s not exactly clear at this point is why the Academy chose to break its own category and implement new rules that would increase the nomination odds for lesser films while handicapping better films. Such a move is contrary to the entire existence of the Oscars, which are intended to reward excellence in cinematic artistry and technical craft.

Notes on the Animated Short Film Nominees:
Real talk: it’s difficult to take this category seriously when a masterpiece like Špela Čadež’s Nighthawk doesn’t even make the Academy’s 10-film shortlist, yet unremarkable student films like In a Heartbeat and Life Smartphone do make the cut. Academy members have never seemed particularly educated about animated filmmaking or even understanding of what makes a good film, and their short film selections often reflect those shortcomings

After the shortlist had been made, the category became rather predictable and played out exactly as we guessed it would.

Interestingly, three of the five nominees are based on literary source materials: Dear Basketball, Negative Space, and Revolting Rhymes all originated as poems.

Negative Space is easily the strongest nominee among this year’s slate. Filled with playful visual creativity, the film expertly uses the expressive potential of animation to say something poignant and meaningful.

There are some returning Academy favorites: Revolting Rhymes is the third nomination for Magic Light Pictures in the animated short category: it was also nominated for The Gruffalo in 2011 and Room on the Broom in 2014. Lou is Pixar’s 13th nomination in the category; the studio won the Oscar last year for Alan Barillaro’s Piper.

Garden Party is a unique French student film that uses a photorealistic cg technique to tell a dialogue-less story with a surprisingly dark twist.

And let’s address the elephant in the room: the nomination of Dear Basketball is bittersweet. While it’s delightful to see an industry icon like Glen Keane recognized for his craft, it’s impossible to overlook that his co-nominee has been accused of sexual assault. As the animation community is already struggling to contain its own bad actors – two of this year’s other animation nominees, Coco and Lou, have an executive producer accused of sexual misconduct – we don’t need to further tarnish the artform by glorifying someone like Bryant.

Notes on the Visual Effects Nominees:
In the visual effects category, we expect the race to come down between Blade Runner 2049 and War for the Planet of the Apes, the two films that have dominated the vfx honors from critics’ groups. The edge goes to Apes, which has extra promotional clout thanks to the celebrity profile of Andy Serkis. Even though Serkis’ campaign to have his mo-cap performances recognized with an acting honor has yet to materialize in any major recognition, the Academy could recognize his contributions (along with the hundreds of others artists who make his performances possible) with a vfx Oscar.

There’s another reason that Apes has the edge: Weta Digital’s work on the two previous Apes was recognized with Oscar noms, but didn’t win the award. An Academy Award for this entry would be a recognition of the groundbreaking character animation performances throughout the trilogy and the culmination of years of technical progress in this final film.

Looking at the overall group of nominees, Cartoon Brew’s vfx editor Ian Failes observed that “there’s a trend perhaps towards beautiful creature work (Kong: Skull Island, Guardians of the Galaxy Vol. 2, and War for the Planet of the Apes),” but he points out that every nominee on the list also has some of “best digital environments and worlds we’ve seen in recent times.”

Failes also points out that all five of this year’s nominees are very much vfx-driven films. “In the past few years,” he says, “there have been a few ‘invisible effects’ candidates in there, and I actually fully expected The Shape of Water or Dunkirk to be among the list this year.”

Congratulations to all the nominees in the animated feature, short, and vfx categories. The Oscars will be presented on Sunday, March 4.