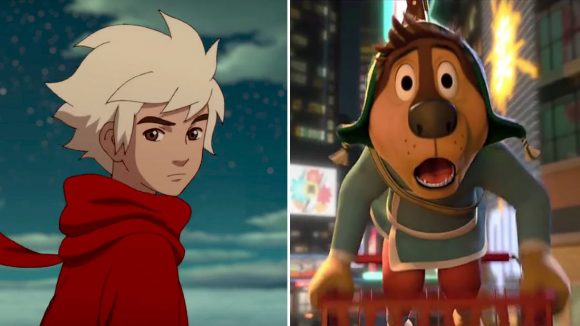 Directed by Liang Xuan and Zhang Chun, Big Fish & Begonia was a labor of love project that took twelve years to complete. The film, which takes its inspiration from Chinese mythology (Zhuangzi, Classic of Mountains and Seas, In Search of the Supernatural), has built up a significant grassroots following in China over the years. In 2013, the filmmakers conducted what was at the time the most successful crowdfunding effort for a single project in China, raising $260,000.

Their success inspired Enlight Media, a major private film company in China, to step in and provide funding to complete the film. Korean animation shop Studio Mir (Voltron: Legendary Defender, The Legend of Korra) also joined the production in 2014 to help finish animation. It is the first release of Enlight’s new animation arm Coloroom Pictures, which recently announced an ambitious plan to release 22 animated features.

Big Fish, which was produced by China’s B&T Studio, was budgeted at 30 million yuan (approx. US$4.5 million). To give some perspective on its $34m opening weekend, Pixar’s Finding Dory has grossed only $37.8m after four weeks of release in China. The opening also tops the $23.6m launch of Zootopia, which has gone on to become the highest-grossing animation release in Chinese history (it should be noted that Zootopia grossed $59.4m in its second weekend in China).

No American distribution plans have been announced for Big Fish & Begonia at this time. Here is the film’s official music video released a few months ago:

On the other end of the spectrum, Rock Dog also opened this weekend in China with US$3.9m. The high-profile Chinese-American co-production, directed by Ash Brannon (Toy Story 2, Surf’s Up) and produced by Reel FX (Free Birds, The Book of Life), is positioning itself as one of the first Chinese animated features designed to compete in the international marketplace.

As we reported a few days ago, an alleged business rivalry between Rock Dog’s production company and a competitior may have negatively impacted the film’s performance in Chinese theaters. While it’s difficult to quantify what effect that had on the film, we do know that Rock Dog had less than one-quarter the showtimes of Big Fish.

The opposite launches of Big Fish & Begonia and Rock Dog are both fascinating and difficult to understand. Big Fish wasn’t a critical darling, and many Chinese reviewers called its story unfocused and its cast of 100+ characters confusing. Working in its favor, the film aimed for Miyazaki-style fantasy, a rarity in China’s domestic animation market, and the filmmakers had years of built-in awareness for the project.

Rock Dog, on the other hand, could end up being a costly misstep for China’s burgeoning animation industry. The film cost $60 million to produce, making it the most expensive Chinese animated feature on record. Planned as a mix of Chinese story values and American graphic slickness that would play equally well in China and abroad, the film shows that there’s no easy formula for creating successful animated films. Rock Dog does have a star English-language voice cast, including J.K. Simmons, Luke Wilson, Eddie Izzard, and Lewis Black, and the film will attempt to win over U.S. audiences later this year.