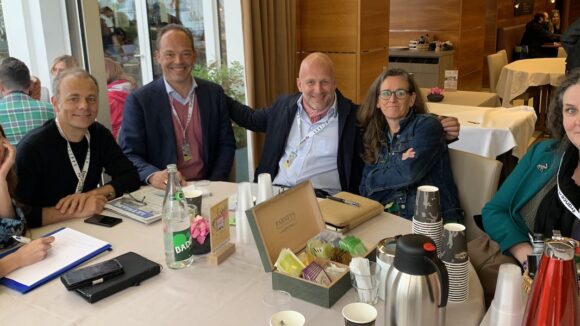 Animation in Europe, a super-union of animation producer associations across the continent, convenes three times a year. During its meeting at last week’s Annecy Festival, the federation’s general assembly elected its board for the next two years.

Philippe Alessandri (Watch Next Media, France) remains as chairman, a role he has held since the federation was set up. Annemie Degryse (Lunanime, Belgium) is joining as treasurer. The vice chairs are Moe Honan (Moetion, Ireland), Dirk Beinhold (Akkord, Germany), and Tom van Waveren (Cake, Netherlands). Mar Sáez Pedrero (ProAnimats, Spain) continues as general secretary. All board members serve on a voluntary basis.

Founded in 2017, the non-profit organization aims to support independent producers, studios, and distributors of animation. It consists of 18 member organizations from 15 countries:

Europe’s industry is growing fast, yet it is sustained to a large extent by funding from both national governments and the European Union, as well as co-productions. Collaborative ventures like Animation in Europe help to shore up the structures on which animation production on the continent depends.

When the federation was first unveiled in 2016, Alessandri said, “We will have three main focuses. One is to get all broadcasters and OTT platforms airing in Europe to invest in original European content. Another is help build an animation industry in Europe by securing public funding. And a third is to defend film and tv animation producer interests with European authorities in Brussels.”

Among its concrete measures to date, Animation in Europe contributed to 2017’s Animation Plan for Europe, which set out proposals for how to attract talent and improve access to private finance, among other goals. The federation meets every year at Annecy, MIPTV, and Cartoon Forum.