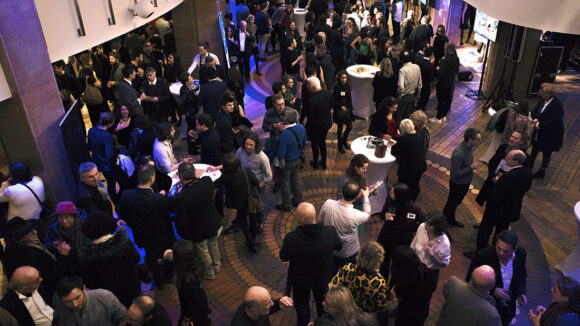 As political protests rocked France, Europe’s animation sector gathered in the northern French city of Lille to sound a note of unity.

The second European Animation Awards (EAA), which took place on Saturday, December 8, were an unapologetic celebration of the continent’s animation community – “a family of highly creative people who doesn’t get together often enough,” to quote Peter Lord, Aardman co-founder and EAA president. Across 19 categories, the awards recognized not just auteurs, but also the industry’s less visible “doers”: commissioners, composers, character animators, and so on.

The event, nicknamed the Emiles (after the French animation pioneers Emile Reynaud and Emile Cohl), grew in scope for its sophomore year. Masterclasses and roundtables were organized around the ceremony proper. The attendees did feel like a vast family – essentially, they were a festival crowd transposed into a slightly more glamorous setting. That said, the ways in which the Emiles presented themselves shed light on European animation’s self-image at a time of great change. Here are our seven takes on the event.

This is stating the obvious. And yet, strikingly often, attendees invoked the American scene when describing the purpose of the Emiles. No European features have been nominated at the coming Golden Globes, and a series of recent rule changes at the Oscars could hurt their chances there too. Meanwhile, the Annies are dominated by Disney year in, year out. There is an air of defiance at the Emiles, a palpable pride in Europe’s culture of small, artisanal films.

But the awards play Hollywood’s game, too. Explicitly modeled on the Annies, they strive to capture some of the glitz of stateside celebrations. A jarring example of this came midway through the ceremony, when contestants in the Miss France beauty pageant were abruptly paraded through the hall, to everyone’s confusion. The charade proved that the Emiles have yet to find their tone.

European animation is about collaboration

The awards constantly stressed the teamwork needed to see an animated project through. This applies on an international level too: the vast majority of nominated features and tv series were co-productions between European countries. Meanwhile, international pre-sales remain a crucial source of funding in the region.

These arrangements, which stem from financial necessity, bolster the continent’s sense of solidarity. They also suit the medium. “Animation travels very well,” said Annemie Degryse, CEO of production company Lunanime. “It’s easy to dub, and the films’ worlds translate into different cultures.” Indeed, around two-thirds of admissions to European animation come from outside national markets.

An intriguing development in recent years is the rise of non-European production partners. This year’s winners included Funan, a feature about the Khmer Rouge’s atrocities; it was co-produced by Cambodian studio Ithinkasia. If this trend continues, will the crowd at the Emiles diversify too?

European animation tilts toward the West

“We have this monolith in America, in Hollywood,” said Lord. “In contrast, Europe has no [geographic] heart.” This may be true, but you wouldn’t have known it from the ceremony. Outside the shorts categories, Western Europe dominated – especially France. Productions from Lille picked up several awards, and got the loudest cheers when they did.

To some extent, this just reflects the industry. France, Spain, and the U.K. alone account for 40% of all animation produced in Europe; conditions are tougher, markets smaller, in Central and Eastern Europe. Even so, there was much talk of how the EAA’s board could give these regions’ rich animation cultures their due.

“Compared to last year, the situation is much improving,” said Daniel Šuljić, director of Animafest Zagreb. “One way to recognize more European countries would be to add short film categories, such as a ‘most innovative film’ award. If features are like novels, shorts are like poems.” Another policy under consideration is to move the ceremony to a new country each year; whether this is economically viable remains to be seen.

A notable prizewinner was This Magnificent Cake!, a 44-minute wool-puppet animated film about Belgium’s colonization of the Congo. The film is stunning, but hardly commercial. “I feel lucky to live in Europe,” said co-director Emma de Swaef, “where weird funds support films critical of their own history.” Indeed, if European animators are able to explore niche themes and techniques, it’s partly thanks to national subsidies (not to mention Europe-wide funding initiatives like the EU’s Creative Europe MEDIA program).

Of the fringe events, the most significant – and arcane – was a roundtable discussion about an incoming European Union law. The Audiovisual Media Service Directive aims to reinforce broadcasting quotas and extend them to video-on-demand (VOD) platforms. If successfully implemented, it will require the likes of Netflix and Amazon to ensure that European content accounts for 30% of their catalogues. It will also oblige them to invest in local productions, either directly or via national funds.

The panel was at pains to point out the law’s shortcomings. “As things are, there is no specific quota for animation,” said Philippe Alessandri, chairman of Animation in Europe. Nor is there much to stop VOD platforms buying old content on the cheap, rather than promoting the latest European productions. Alessandri noted that the streaming companies will fight hard for the intellectual property of anything they co-finance, and do everything to minimize their contributions.

Legislation or no, the VOD titans are worrying Europe’s distributors, and enticing some of its top animators. “I feel like the Netflixes of this world are Aardman’s future,” said Lord.

With Brexit looming, the U.K.’s presence at the Emiles was charged with a kind of self-consciousness. Introducing Peter Lord, fellow board member Jean-Paul Commin quipped that, “He’s a Brit – but nobody’s perfect.”

Jokes aside, the Emiles made a show of honoring the country’s output. The ceremony opened with a tribute to Roger Mainwood, the late director of Ethel & Ernest, and closed with a screening of Yellow Submarine. The Lotte Reiniger Lifetime Achievement Award went to Clare Kitson, a hugely influential former commissioner at the U.K.’s Channel 4. Brits bagged many nominations too, particularly in the tv categories. The country’s animation sector has been boosted by the creation of specific tax breaks for animation – a first for Europe – in 2013.

Until the final terms of Brexit are settled, nobody can predict its impact on the industry. If the country renounces freedom of movement for Europeans, it could be drastic: Up to 40% of workers in the U.K.’s animation, visual effects, and post-production studios are foreign nationals.

While female directors were behind half of the nominated shorts – and were directors or co-directors on all five student films – they only accounted for a quarter of the tv productions and feature nominees. One of those features, Cartoon Saloon’s The Breadwinner, won all four prizes it was up for. Accepting her award for best director, Nora Twomey issued a call to arms: “To young female directors — don’t listen to the voice in your head that says you can’t do a feature. You definitely can.”

Twomey’s award closely follows the news that Domee Shi, the first woman to direct a short at Pixar (Bao), is now developing a feature at the studio. These directors’ rising profiles may well have a galvanizing effect on young female filmmakers. But Kitson, who brought many female animators to prominence, cautioned against fetishizing a career in feature films. “Animators should ask themselves whether they want to push hard enough to direct one. You can say so much in a short.”

For all the teething problems, there was a giddying sense of momentum at the Emiles. Europe is now producing dozens of features per year, and animation is the most widely exported category of tv series. In its recent Animation Plan, the European Commission identified the sector’s potential for growth. Underpinned by laws and infrastructure, cultivated by shindigs like this one, a European identity is beginning to take shape in animation.

The Emiles already cover a lot of ground, and they look set to expand along with the industry. “We need categories that recognize hybrid animation, which is how the medium started,” said Didier Brunner, veteran producer and EAA vice-president. “And virtual reality. There are interesting projects there.”

It’s hard to fault the awards for their ambition and dedication to the craft. There will always be room for criticism, if only because the definition of “European animation” will always be contested. Families bicker. But they love each other, too – and with the second Emiles now over, the lingering impression is one of passion and mutual support.