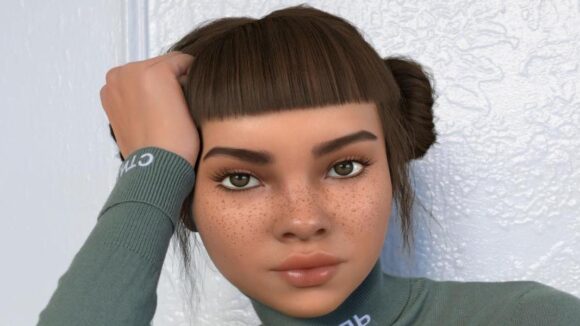 Miquela has signed with Los Angeles-based Creative Artists Agency (CAA), capping her remarkable ascent from the uncanny valley to Hollywood.

For those who don’t live on Instagram or Tiktok: Lil Miquela, as she’s often called, is a virtual influencer — the first to sign with the prominent talent agency. According to Variety, which broke the news, CAA “will work with Miquela in all areas, including tv, film, and brand strategy and commercial endorsements.” [UPDATE: CAA repped Tomb Raider’s Lara Croft starting in 2002, which would technically be their first cartoon client. We have updated the headline to reflect that Lil Miquela is CAA’s first virtual being client, but their second cartoon client.]

The photorealistic cg character launched on Instagram in April 2016, and has since amassed 2.2 million followers there, as well as almost 550,000 on video-sharing app Tiktok. She sings (look her up on Spotify), reports from events like Coachella, and endorses fashion brands. Through it all, she keeps a running commentary on her “life” on social media, sometimes riffing on her artificiality.

For years, her origins remained shrouded in secrecy as she built her global following. In 2018, L.A.-based startup Brud revealed itself as the creator of Miquela, as well as fellow virtual influencers Blawko and Bermuda. The company, which has a minimal public profile, has raised over $6 million (according to Crunchbase), including from major Silicon Valley investors.

In a statement provided to Variety, Brud president Kara Weber said, “Miquela has cultivated a passionate fandom and now finds herself in the unique position of both reflecting and influencing culture. There are unprecedented opportunities for high-fidelity virtual characters to push the bounds of what we’ve seen in any content and advertising to date. We look forward to developing that opportunity with CAA.”

Adam Friedman, global client strategy executive at CAA, added, “Over the last few years, we’ve watched the team at Brud create a true multi-hyphenate in Miquela. We are excited to jump in and help her navigate the world of television and film, and also see a unique opportunity for innovative, forward-thinking brands to align with a culturally relevant icon-in-the-making.”

Synthetic influencers, of which Miquela is the best-known example, are a subset of “virtual beings” — tech jargon for the unreal characters that feature in everything from films and vr experiences to Amazon’s Alexa assistant. The field is attracting growing interest from tech companies, artificial intelligence (ai) experts, entrepreneurs — and now Hollywood.

In November, the second Virtual Beings Summit was held at the United Talent Agency Theater in Beverly Hills. Commenting on the field’s potential, the organizers said, “machine learning and ai alone aren’t enough. We need artists working alongside engineers … We will all need to work together to create truly living characters.”

That’s where CAA comes in — it hopes to bridge the gap. The deal positions Miquela to appear in traditional formats like films and tv shows, where she would appear as a traditional animated character. Her legions of fans would see her life unfold in new storylines; studios would get to leverage her star power while sidestepping the myriad regulations and complications that come with hiring a human actor. Will it work? Let us know your thoughts in a comment below.