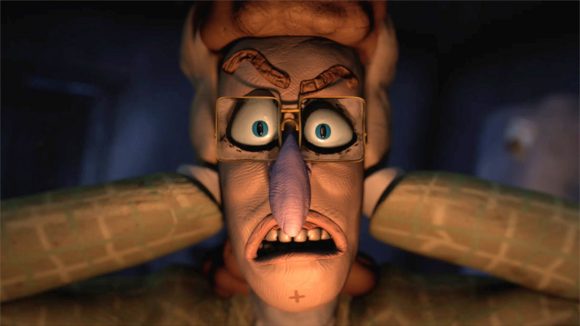 Now one of its newest alumni, director Sam Southward, looks set to also make an impact on the animated world with his graduation film After The End, a hybrid CG and live-action background short that offers a very different take on life after the apocalypse. We are proud to premiere the film online today at Cartoon Brew. Watch it below:

Southward was recently signed by the independent production company and animation studio Nexus Productions, an esteemed London shop with a long list of commercials, vr, music video, and shorts credits, along with a roster of some of today’s most celebrated indie animation directors. He wrote After The End with Samantha Collins and decided that the story of the second-to-last man on Earth, which features some mind-altering drugs and full-frontal male nudity, would be well suited to the combination of CG and live action. “It borrows from the charm of stop-motion miniature sets and the beauty and texture you get by using real light,” Southward told Cartoon Brew.

Still, it took more than 20 drafts of the script to get to After The End into shape. When writing began in early 2014 the director says there had been few humorous takes on life after some kind of apocalyptic event. That was the starting point, he explained, with the film taking a few interesting turns and the story becoming a “microcosm of the destruction of mankind ironically repeating itself again, with no lessons learned.”

Inspired by the visuals a post-apocalyptic world could evoke in animation, Southward produced several storyboards out of the script, beginning with thumbnails in his notebook and then moving into neater passes using a Wacom with Photoshop. From there, an animatic was cut which would ultimately inform the design and construction of the miniature sets.

Four sets in total were designed by production designer Olivia Dixon and built for filming using cardboard, polystyrene, wood, and a myriad of other materials. Some of the props were ‘stolen’ from doll houses, said Southward, while other pieces came from the bottom of a fish tank. The sand is a mixture of real sand and kitty litter. Cinematographer Diana Olifirova captured the live-action sets with a Canon 5D.

The next step involved crafting the characters in CG. Even though the latest tools—ZBrush, Maya, V-Ray, NUKE—were used to build, animate, render, and composite the computer graphics work, Southward designed After The End’s characters with a ‘hand-made and low-fi’ feel. “I think it adds charm and character in a world surrounded by a lot of super slick CG,” noted the director.

Interestingly, much of the character animation (more than 200 shots) took place predominantly remotely by animators in several different countries. Southward had to quickly grow accustomed to an almost 24 hour production cycle. “I would wake up at six in the morning in the UK, send out my feedback from the previous day, work a full day up until 10 or 11 at night, then our animators in America and Brazil would wake up and start sending though their work to review.”

As the film plays out and we learn more about its characters in the post-apocalyptic world, Southward employed a deliberate but subtle change in the way the film was shot. For example, the climax of the film takes place at night, a more dramatic setting. Here the emotions of Rene Fustercluck (voiced by Peter Caulfield), the man who thinks he is the last surviving human, and Gordon (Tom Davis), who suddenly appears in a dress and carrying a blow-up doll, were designed to feel more primal and volatile. Southward suggests this was exaggerated even further by having them lit by a flickering campfire.

Additional emotion came from the sound design and music, overseen by sound designer Ben Hensor and composer Antonio Nardi, respectively. One challenge of the sound was to help convey the atmosphere of a dead and empty world. At first, Southward thought this would be best done with minimal sound design, but he discovered that instead it worked with design that was “in fact incredibly layered and complex and had to hit all of the right nuances at the right time.”

So, what now? Southward says the plan is to develop an After The End series in the near future. There seems to be plenty of places the filmmaker can take the story; the original script was three times the size of the final film, and Southward and co-writer Collins have already produced outlines for the next few planned episodes and an overall story arc.

Right now, Southward is looking forward to seeing what reaction the short receives, having already earned a nomination for the 2016 D&AD ‘Next Director’ award and won Gold at this year’s Cannes Young Director Awards. “Now the film has finally been released online, I hope it makes people laugh. That’s why we wrote the film and I think that in the increasingly bleak times we live in, laughing is good.”