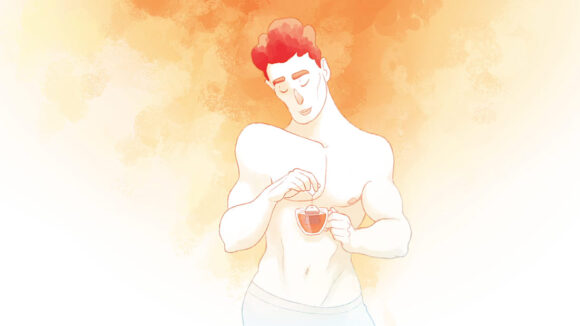 “A man indulges in the vapor of a glass of hot tea. He drifts off to a colorful world where scents seem to be visualized and assume physical powers.”

If you’ve seen the film this may come as a surprise (or maybe not), but originally, Hot Tea started as a joke. I was fooling around during breakfast, swirling my tea bag around my cup in an exaggerated, sensual way. I thought it could be fun to animate a character acting this way. Since it was really just a concept and not a story, we figured it would fit nicely in the yearly [Dutch Film Fund] “Ultrashort” project, which funds films of no longer than 2 minutes.

As I developed the film, the project took on a bit more of a serious tone. While still presented in a playful way, a theme emerged: to explore the more sensual side of men, rather than treating it as a joke. Several different iterations were explored, like introducing a female character at some point, or keeping the fact that the character was a man a secret until the end of the film. Ultimately, we made the decision to go for the direct approach. Just a man, right up front, on his own, really (really, REALLY) enjoying a cup of tea.

Animated on paper and colored in TVPaint.