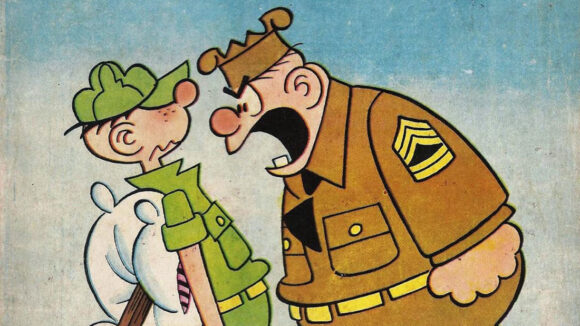 At the time that Beetle Bailey creator Mort Walker died in 2018, he was the longest-tenured artist to remain involved with an original comic creation, having worked on his military-themed comic since its inception in 1950.

The new mini-doc Reveille – A Family Legacy In Comics, which was filmed before Walker’s death, gives a rare insight into how a single Beetle Bailey strip comes to life, with the assistance of Walker’s sons Brian and Greg, as well as Mort’s longtime creative partner Jerry Dumas. It’s a fascinating watch:

Since the footage was shot — it appears to have been filmed in 2014 — both Walker and Dumas have passed away, but Brian and Greg continue to produce the strip, along with their younger brother, Neal.

What really stood out to me in this documentary is the intimacy of how the comic strip is produced. It’s easy to think of comic strips in the same way that we think about animation — corporate-owned IP wherein a large creative team debates each and every creative choice. It’s a refreshing surprise to discover then that Beetle Bailey, despite being one of the most widely syndicated strips, remains a tight-knit creative affair. A “gag conference” is essentially Walker and his sons grading each other’s ideas. In the animation world, such intimacy typically exists in the independent sphere, but a commercially successful project will almost certainly have cumbersome layers of management and interference.

Staying true to the spirit of the family-run strip, the film was made by Walker’s grandson, Dave. He offers this director’s statement about his reasons for wanting to make the film:

This film is a very personal work that documents the creative legacy of my grandfather and his comics business, which has also employed my father and uncle for as long as I can remember. Growing up in a family of cartoonists, I always took for granted the everyday ambience of ink-splattered drawing boards, stacks of Bristol board and the monthly “gag conference.” I was aware that what my father did for work everyday was a bit different from the norm, but I didn’t yet have an appreciation for the consistency and quality of his craft.

As I developed my own creative practice as a filmmaker, I began to see the family business in a new light. For anyone who has ever struggled to finish a project or has come down with a bad case of writer’s block, the steady output of a syndicated comic strip is an impressive feat. Three hundred sixty five days a year, no matter the circumstances, cartoonists have to deliver a product that lives up to the brand of humor that their readers expect.

Fittingly, for a strip about the military, my grandfather established a regimented structure over the years to keep the ideas flowing, the strips printing, and the quality under control. After years working with his partner Jerry Dumas, he eventually recruited his sons, Greg, Brian and Neal to join the ranks. Jerry and Mort passed away two years apart, in 2016 and 2018. Flash forward to today and the business finds the Walker brothers steeped in almost seventy years of experience in what makes a good “Beetle Bailey” gag, which is a specific flavor of humor combining slapstick, strong characters, and my grandfather’s folksy midwestern wit.

For me, the deeper I dug into their creative process, the more it illuminated inherited traditions and revealed family histories that can’t be disentangled from the strip and its characters. Ultimately, this film is just a piece of an ongoing story that touches four generations of my family – from collective memories of reading The Sunday Funnies on Dad’s lap, to my uncle’s fondness for the scratchy sound of my grandfather’s ink pen, to discovering my own creative voice and the lineage that has shaped it.

It should be noted that Walker was incredibly prolific, and was involved in more than a half-dozen other strips besides Beetle Bailey throughout his legendary career. The Fabulous Fifties blog has over 100 posts dedicated to Walker’s comic work, including a lot of his non-Beetle Bailey work.