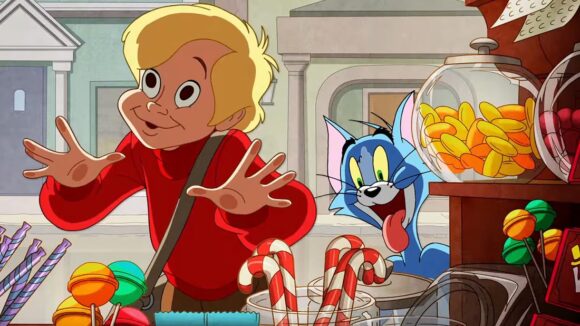 In this film, Tom and Jerry find themselves wedged into the plot of another WB-owned property, the 1971 feature Willy Wonka & the Chocolate Factory:

The Willy Wonka production designs and human characters appear to overwhelm the film’s budget, but another trailer recently released online, which looks to be a sequence from the opening of the film, isn’t nearly as garish as the trailer above. In this clip (below), the poses and timing are sharper, the characters behave fairly much like themselves, and the backgrounds even attempt a pleasant watercolor-feeling.

In any case, WB seems to be giving people what they want. Last fall, a group of people online began developing their own Tom & Jerry meet Willy Wonka fanfic.

You know what two franchises I'd pay to see mashed together?
Tom & Jerry and Willy Wonka!

I have been sitting in my office for 30 minutes like pic.twitter.com/2rQM3z01mw

the Tom And Jerry: Willy Wonka And The Chocolate Factory trailer feels so much like it was produced in-house for a Clickhole bit

Did you want an animated shot for shot remake of the 70's Wonka movie but with Tom & Jerry contrived into the story? https://t.co/lbNQhnJooT