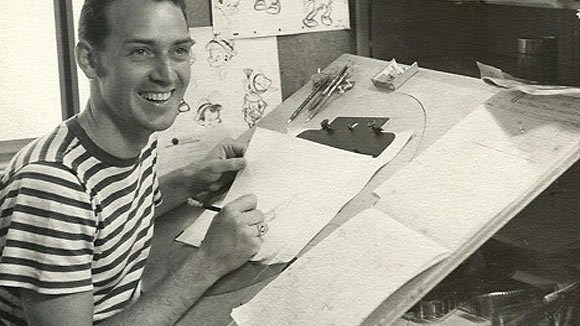 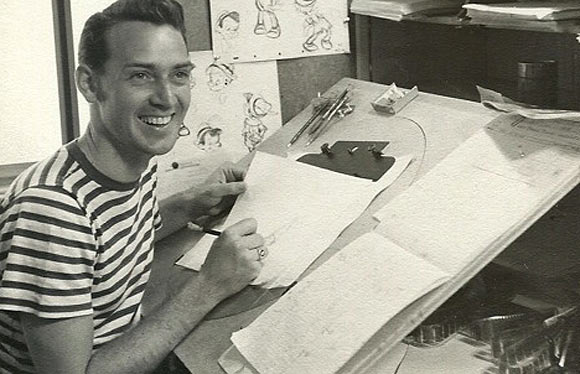 Celebrating the centennial of a great animator is something we don’t get to do very often, so it’s a particularly joyful occasion that today we are able to wish a happy 100th birthday to Don Lusk.

Don started his animation career at Disney in 1933 and worked there continuously (except for the Disney strike and military service) until 1960. Of the seventeen animated features made by Disney from Snow White and the Seven Dwarfs to 101 Dalmatians, Don was an animator on 13 of them. He animated Cleo and Figaro in Pinocchio, the Arabian Fish Dance in the “Nutracker Suite” of Fantasia, the title character in Alice in Wonderland, and Wendy in Peter Pan, to name but a few.

After being let go from Disney in 1960, Lusk spent many years animating at different studios, including UPA (where he worked on Gay Purr-ee), Walter Lantz Studios, DePatie-Freleng, and Bill Melendez Productions, where he animated on at least ten Peanuts specials. He spent the bulk of his later career working at Hanna-Barbera, where he timed and directed hundreds of episodes of countless TV series including The Smurfs, Snorks, Yo Yogi!, The Pirates of Dark Water, and Captain Planet and the Planeteers before retiring from the animation industry at the age of eighty.

In honor of Lusk’s birthday, the Animation Guild blog has posted the first part of an audio interview conducted earlier this month. And Don’s son, Skip, has generously shared with Cartoon Brew a selection of photos from throughout Don’s life, which can be viewed below. Congratulations, Don, on your 100th and best wishes and continued good health from all of us at Cartoon Brew!

Don acknowledging his centennial in a modern way.

Don attempted an acting career in the mid-1930s. The Depression diverted his focus to a more steadily paying job in animation.

Don playing the same piano that he played when he was fourteen years old. His father was a concert pianist.

Don at his grandson’s wedding ,2000. Two of his daughters are standing at the far ends.

Don at his granddaughter’s wedding, 2000.

Don with his extended family in 2012.