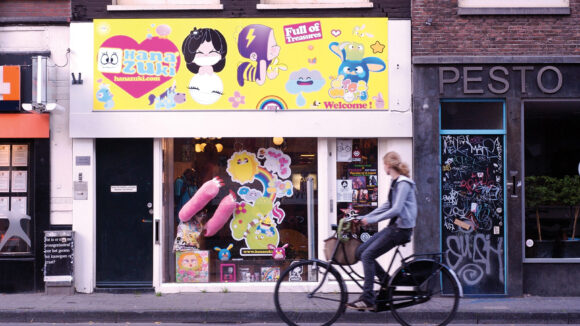 In 2017 Hasbro launched Hanazuki: Full of Treasures, a girl-focused brand with the goal of helping children understand their moods through colorful adventures. It proved a hit as Hasbro’s first digital animated series, delivering tens of million of views across the toy company’s various Youtube channels within the first six months of its release. What’s more notable though is that the idea was conceived by a two-person creative company running a concept store in Amsterdam.

Hanazuki is the brainchild of Hanneke Metselaar and Niko Stumpo; together they run the independent creative studio, Thisisarobot. Their now-closed concept store formed the creative ground where Hanazuki was first developed from 2005 on, before being sold to Hasbro in 2011.

Cartoon Brew sat down with Metselaar at Cinekid Festival in Amsterdam last October to discuss handing over their ‘baby,’ the freedom of world-building, and facilitating your own creative process.

Handing over your idea to a bigger company

Selling Hanazuki to Hasbro felt like letting your child go into the big wide world, Metselaar recalls. She didn’t want to grow into a big company to manage the Hanazuki brand themselves. Instead, they chose “flexibility, to stay artistic and creative,” she says. “And we really wanted to see Hanazuki become big. In this world, as a small studio, that’s difficult to do.”

Essential to the sale was business partner Andrew Kerr, who came on board when the project was pitched at Cinekid in Amsterdam, and who ultimately sold the property to Hasbro. “[Andrew] brought with him a piece of commercial value,” Metselaar says of welcoming a third partner on the project. “I think, if you create and you have this soul, then you can’t sell it yourself; you need someone else to do it for you. As a creative [person] by yourself, you’d be able to walk away and make decisions that are not so smart business-wise… There are few [people] who can sell themselves and the characters in which they’ve poured so much love.”

When asked what made Hanazuki stand out to Hasbro, Metselaar says, “Well, these things are always a case of ‘right place, right time.’ Hasbro was looking for something that we had. That said, every good character-based IP feels familiar and original at the same time. Hanazuki is that to a lot of people.”

The original IP landscape has changed heavily in recent years; a brand that can take shape only as a series isn’t enough for today’s competitive landscape. That creates limitations for creators, but also opportunities to tell stories more freely. “Kids nowadays really don’t need 26 episodes with episodic storytelling,” Metselaar explains. “Today’s users are experiencing brands crisscross; they watch a short standalone video on the phone, then click on a longer episodic series on the iPad.”

Following the lead of that young target audience, it’s important for artists to not confine themselves to a single platform, Metselaar suggests. “It stifles your creativity if you think about the medium too early on in the development process. Each medium has its own limitations and possibilities. When building a world, you don’t have to comply with those at first. You’ll think about it later.”

Instead, she suggests to focus on the ‘meta-story’ of your characters and world first, then try to develop a game, series, or anything else within that framework. “When you discover that [something] doesn’t work, ask yourself why. Perhaps you will discover that there should be more characters, just to give an example. That’s how you build on what you have. This process of applying mediums [or platforms] to a world helps make your world become more concrete, and your IP’s core more clear.”

In Hanazuki, the core is: Whatever way you feel, it’s okay. Metselaar recalls it took at least two years for them to really feel like they found Hanazuki as a character, to find her core. “I think for every good [character] it takes at least a few year before you find its core. You have to give it that time… Sure, the basic idea for Hanazuki we already had on a piece of paper at a pub. But whole worlds are complex, you have to sleep on that to get some distance, at several times during the process.”

The video above, described as “a period of transformation,” was uploaded to Thisisarobot’s Vimeo channel around the time they sold Hanazuki to Hasbro.

Doing instead of explaining

When Metselaar and Stumpo founded The Hanazuki Company in 2005, it was essentially a concept store and studio in Amsterdam. The creative duo sold puppets, t-shirts, and all kinds of other things made by themselves and by international designer friends. “Starting our own store came from the pure frustration of us creating things, and then having to explain to stores why they should sell our creations,” says Metselaar. “At this point of explaining and convincing others, that’s often where a project stops.”

In their shop, which hosted frequent workshops and exhibits, the duo could continuously experiment with new characters and receive instant feedback from their clients. Making their ideas “tangible and real” was a big key to their company’s success, says Metselaar. “We’d get a feel for what works, what people would fall in love with. We’d create simply to create, to see how something works. That’s how things grow.”

Unfortunately this act of simply ‘doing’ doesn’t happen enough, Metselaar says. “You have to DO, and consequently make mistakes. Everybody always talks about everything, but nobody just DOES it. And if you don’t DO, then the only thing you have is ideas on a piece of paper.”

Being in touch with their audience was very inspiring, says Metselaar, even when faced with negative responses. “If it provokes an opinion, then that’s always a positive thing, no matter if it’s a positive or negative opinion. The only actual negative response is a neutral one.”

Facilitating your own creativity

In creating ideas and concepts, Metselaar has made a career out of facilitating her own creative process. So how does she do that? “It’s difficult,” she admits, “because being ‘busy busy busy’ at your desk is good — or rather, sounds good. But an idea doesn’t come to you when you sit down. You have to give yourself the space to let it arise. The biggest must is to have no pressure. When you feel pressure, you’ll never have ideas come to you.”

Metselaar advises that if there is pressure — from outside or inside — one has to find a way not to feel that pressure. “For me, I often go paint; do stuff with my hands. People in the building will pass by while I’m painting, and they ask, ‘What are you doing?,’ and I reply, ‘I’m thinking.’ The point is, you have to go do something else while your mind can wander. You have to let go in order for an idea to come to you.”