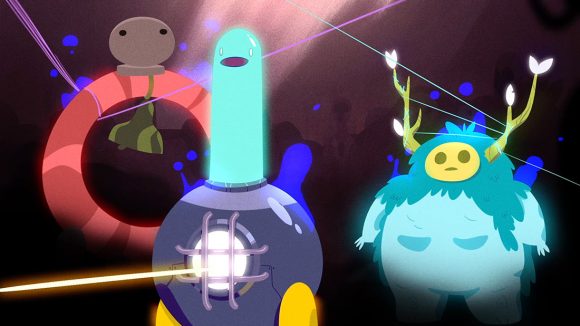 Over the last few years, Pixelatl Festival has emerged as a cornerstone of Mexico’s rapidly growing animation industry, serving as a gathering point for the industry’s artists and helping make connections between Mexico’s burgeoning industry and the global animation marketplace.

Cartoon Brew is delighted to premiere the trailer for the 2016 edition, set to take place between September 6-11 in the town of Cuernavaca, Mexico, about an hour south of Mexico City. The trailer expresses this year’s theme: “Storytelling brings us together, creates community and defines us as human.”

Pixelatl director José Iñesta explained to Cartoon Brew why the event is placing an emphasis on storytelling as its theme this year:

“We learn about ourselves through the stories and experiences of the people that were here before us. Narrative connects generations and links differences because when we tell a story, speaker and audience become part of the same universe. Their hearts beat through the same words and feelings. Then, the individual blurs into the collective and that’s how we create a community.

In order to build the animation industry in México, we need a group of passionate people willing to share their history in order to create a community. We also need their stories and dreams in order to unite the broken reality that surrounds us. Only with the artists’ connected hearts and shared stories we will be able to develop an industry that will endure.”

Iñesta commissioned Guadalajara, Mexico-based Mighty Animation to create the trailer. Founded by Luispa Salmon and Claudio Jimenez in 2012, the company has made a bright impression on the industry during its first few years, moving from advertising work to providing pre-production and production services for other studios in Mexico. The company was nominated this year for an Ariel Award (Mexico’s equivalent of the Academy Award) for the animated short Conejo en la Luna produced with Canal 22, and will premiere its first original IP on a major Latin American network this fall.

Mighty co-founder Salmon tells Cartoon Brew that the trailer’s string concept came from discussions around the idea of how storytelling makes us human, “a deep and meaningful concept about sharing and becoming more than ourselves, understanding the idea of ‘us’ as a way to transcend.” Mighty also drew inspiration from the Mexican artisanal weaving technique telar where different colors of string are used to create a single pattern design, an analogy for the animation process itself where teamwork is often required to build something bigger than can be achieved by any single individual.

Besides screenings, workshops, market, and an expo, Pixelatl includes the competitive Ideatoon Summit, in which Mexican artists and studios pitch projects to international animation executives and distributors, and receive advice on developing and producing ideas. In addition to the conference’s focus on animation, the event also has events dedicated to the professional development of video game and comic book professionals.

For more information about this year’s conference and Ideatoon Summit, visit ElFestival.mx.