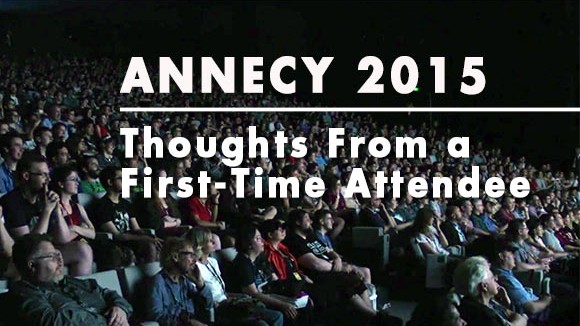 I finally attended the mythical Annecy International Animated Film Festival, and overall I have to say my expectations were met quite well. It was nice to discover that Annecy is just like any other animation festival — except much larger.

The biggest surprise was probably Annecy itself, a quaint French town on a giant, beautiful lake surrounded by mountains, with many cute bars and restaurants within walking distance. It is the perfect place for a festival.

The next surprise is that there were so many animators and people to meet that often you would see someone just once and then rarely bump into them again. I’m used to festivals where each day you see the same small crowd over and over, so Annecy really tested my name-remembering skills. Here are some practical things I noticed for future first-time attendees:

The ticket system was quite painless. Make sure to examine the program beforehand, and then be at your computer at 2PM on the Tuesday before the festival, when tickets are available for reservation. You can reserve two tickets for each day, right then and there. If you want a third ticket, be at your computer again at 2PM on the Sunday right before the festival, when you’ll be able to reserve a third for each day.

However, you can simply walk up to the screenings, where they will scan your pass and let you in as long as it’s not packed. You can also get an Annecy app on your phone which allows you to cancel reservations and make different ones. However, if you don’t have data and need wifi, then you’re out of luck, because there was no wifi, as far as I could tell, at any festival venue. Annecy does offer some computers with access the internet in the main venue, so you can always change reservations there. As a last resort, you can stand in line with the other people without a reservation, but you probably won’t be able to get into the popular programs.

For those wondering which pass to get, I was quite happy with the cheapest one, which let me into all screenings that weren’t invitation-only, as well as the pitch sessions and a small portion of the MIFA exhibition floor.

The cheapest way to get to and from the Geneva airport is by public bus, which cost about €16 but took almost two hours. On weekdays, it’s very convenient. But if you’re leaving, like we were, on a Sunday, direct buses are rarer.

If you have plenty of time, take the public bus to the Geneva train station and then change to another train for the airport. This will still be cheaper than the festival shuttle, which is €40 one-way or €70 both ways. But my advice is to leave on Saturday rather than Sunday. Sure, you’ll miss the closing-night ceremony and party (if you got an invite), but by that time everyone is exhausted anyway.

I didn’t have a film in the festival, so I attended mostly for networking, which means parties. I was lucky to get invitations to some parties, but some didn’t even need one. My advice for those without invites is to simply ask where and when the parties are, and then show up — unless it’s the German party, which had a list. If you’re at a loss, there’s always the Cafe des Arts, a pub on the island in the river. There is usually someone there from the festival, but be warned: It’s €6.25 for a ‘large’ beer.

I caught a few of the short and feature pitches at MIFA, the film market that runs alongside the Annecy festival. I was puzzled by the short pitches; compared to the Visegrad Animation Forum pitches I witnessed at Anifilm in May, MIFA’s seemed much less business-oriented. No one mentioned budgets or how much money they were looking for, and there were very few questions from either the public or the pitch jurors. However, the one feature pitch I did catch was very slick: A €7.5 million production about a donkey in World War I. Very Hollywood.

Eden’s Edge directed by Gerhard Treml and Leo Calice
A segmented feature about the relationship between the landscape of the Californian desert and its occupants, Eden’s Edge was a very conceptual project, and while not perfect, was great to see. The visuals consisted of a bird’s eye view of a desert scene, with a character down below walking around as he tells his story. We never see the character closely, but learn about him through his words and interaction with his environment. It was also interesting to hear that Eden’s Edge is part of a greater artistic research project largely funded through the Austrian Science Fund.

Magic Mountain directed by Anca Damian
I had seen Damian’s earlier film Crulic, which was also a mixed-media documentary about an activist. Magic Mountain’s Adam Jacek Winkler was a Polish artist who ended up fighting the Russians in Afghanistan. The film had some inspiring moments, and I would definitely recommend it, but as with most animated features, it could have about twenty minutes cut out of its middle. There was some digital cut-out animation that could have used more attention to detail.

The Guardian by Alessandro Novelli
This film represents a trend, which I think is popular now, of creating line animation, but with a lot of 3D camera moves that are traced in line animation (or perhaps 3D animation rendered out to look 2D). I also found this short intriguing, because what I heard in its narration is not literally represented in its animation. In fact, it’s quite abstract, so your brain has to stretch harder to make the visuals and the animation work together.

Penny Dreadful directed by Gergely Wootsch
This nice short was made to advertise the television show, and appeared in Annecy’s Commissioned Films section. Nicely done, with many fun textures and overlays.

Round by Kirk Hendry
I absolutely loved this short, which screened in the Handmade Puppet Dreams special program curated by IBEX Puppetry, a company founded by Heather Henson, daughter of Jim, and dedicated to “promoting the fine art of puppetry.” I thought it was generally very inventive, used the art of shadow puppetry to its advantage, and definitely seemed proud of being puppeteered. As I feel there is no need for puppetry to pretend to be stop-motion animation, I found Round to be so simple yet so effective.

Florence Miailhe: I was happy to be introduced to the work of Miailhe, who uses a lot of paint on glass and on canvas. But it was actually Miailhe’s two films that involve sand which really stood out for me.

One of them — Les Oiseaux Blancs, les Oiseaux Noirs, a fable about white and black birds — took nice advantage of black and white powders. Acteon — a collaboration between Miailhe, Elodie Bouedec, and Mathilde Philippon-Aginski — involves overlays of sand animation, but also video of hands moving the sand, as male and female voiceovers both told the same Greek myth, often talking over each other. It was atmospheric and beautiful; I wish I could watch it again.

I also saw a making-of video featuring Miailhe animating a version of the Annecy poster, originally designed by Regina Pessoa. I really liked the way Miailhe used an oil pastel or wax crayon that she can scrape away, leaving remnants behind.

Stacey Steers: Annecy also featured a retrospective of Steers’s work, which I must admit was another new name to me. I found her recent collage animation more interesting than her early hand-drawn work. Keep an eye out for her work-in-progress, Random Forces, a Victorian sci-fi film she previewed during a lecture at Annecy.

Jacques Drouin and Michele Lemieux: Current keepers of the National Film Board’s pin screen in Montreal, Canadians Drouin and Lemieux’s masterclass talk was a special event of Annecy’s festival. Both explained their histories with the machine and gave a demonstration.

Drouin also explained how he helped restore all of the older pin screens, including the one on which they demonstrated, which are now available in a limited capacity to select animation artists. Before the masterclass, there was a three-day workshop to teach 10 animators about the pin screen, although it was unclear if animators from all over the world were eligible to apply to use the pin screen in France.

Scanning the application rules, it seemed only French citizens or residents were eligible for the workshop, so I very much hope future workshops will be open to others. One could conceivably move to France for the duration of the project, just like an artist residency, as there are only two working pin screens in the entire world, and Drouin and Lemieux restored the second one precisely so the art form would not die out. If you’re interested in future workshops, keep an eye on the CNC website, but be warned: Announcement of the previous workshop only appeared on the site’s French language version.

Shadow Tamers, by Alexandre Alexeieff and Claire Parker: This exhibition at the Musee-Chateau of Alexeieff/Parker, was by far the highlight of my trip. This extensive exhibit chronicled the careers of Alexeieff and Parker and their invention of the pin screen, as well as other film trickery and Alexeieff’s earlier career as an illustrator. On the top floor was a nice collection of his early illustrations, made with aquatint or lithograph techniques.

One was an advertisement for the British Rail company about the night train to Scotland, whose same poster hung in my Scottish grandmother’s house for years. I also had a charity shop version in my house for years, although I had no idea it was made by Alexeieff.

It’s nice to sometimes think that my grandmother had a little bit of animation history in her home all those years, without realizing it.

Tess Martin is an independent animator who works with cut-outs, ink, paint, sand or objects. Her most recent award-winning films are The Lost Mariner, an animated interpretation of an Oliver Sacks case study, and Mario, a paint on glass film based on an Italian folk song. Her films have displayed at galleries and festivals worldwide. She curates touring programs of films from Seattle and the Northwest and runs a monthly animation event in Rotterdam, the Netherlands.