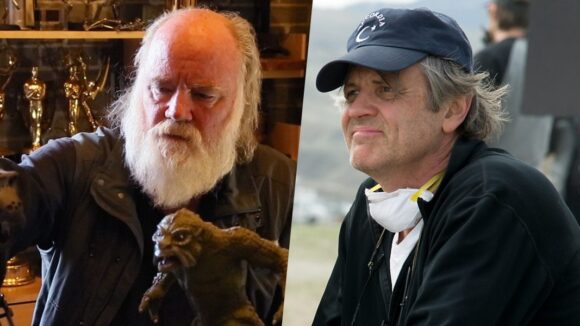 Ever wonder how speakers and particular speaking sessions get organized at animation conferences? I certainly did, until recently when I had the opportunity to help curate a conference ‘track’ for the upcoming FMX event in Stuttgart.

From April 24th, scores of speakers and attendees will converge on the German city for FMX, an event that focuses on visual effects and animation that in recent years has also showcased games, immersive entertainment, and the business of the digital art industry. My track, called ‘Then & Now’, is designed to look back at some of the pioneers in vfx and animation and explore with them how their approaches to the art have changed – and perhaps not changed – up through today.

The speakers in ‘Then & Now’ are visual effects supervisor Phil Tippett and director Chris Wedge. In addition, I’m moderating a panel of animation experts at FMX which will include Wedge, Shannon Tindle, and David Silverman, as they discuss their craft, old and new. I thought I’d share my thinking behind the organization of those sessions at FMX.

I’ve been going to FMX since 2011, but the conference actually has a 20-plus year long history. It’s part of the prestigious Filmakademie Baden-Wuerttemberg and also runs at the same time as the Stuttgart International Festival of Animated Film. FMX is big, but what tends to set FMX apart from other large conferences is the chance to still interact with the speakers, and certainly other attendees. The speakers are regularly available to talk to before and after their talks.

I came up with the idea for a ‘Then & Now’ type of track after seeing visual effects supervisor Volker Engel give a talk on his work for Independence Day: Resurgence, the sequel to Independence Day and a film Volker also supervised. The original film relied heavily on practical effects and miniatures while also pushing into the digital age of vfx, while the latest film was a much heavier cg project.

I wanted to explore more stories like Engel’s, and in particular what lessons he had perhaps learnt in the practical effects world that were translated into the digital world. At Cartoon Brew, I’d even been exploring that notion a little with stories on films like Terminator 2, which pushed the practical side of effects while also leaping into digital.

As it turned out, FMX had a similar idea for the ‘Then & Now’ track at the conference. And so, my quest began.

My first stop was Phil Tippett. He is perhaps one of the most well-known artists in terms of someone who had to bridge the gap between the hands-on craft of stop-motion and creature effects (original Star Wars trilogy, Robocop) and that of cg animation (Starship Troopers). I say ‘had to’ because Tippett’s company, Tippett Studio, was originally earmarked by Steven Spielberg to craft stop-motion dinosaurs for Jurassic Park, until the director saw what ILM’s computer animation could bring to the film.

Of course, Tippett remained on Jurassic Park and brought his wealth of knowledge on creature behavior and animation to the project. Realizing that the digital era was here to stay, Tippett engaged in the new technology and ultimately delivered some of the impressive cg animated bugs for Starship Troopers, plus scores of subsequent creatures and characters in different films.

Lately, the visual effects supervisor has returned to his roots via his stop-motion animated Mad God project (which will actually be screened at FMX). This full-circle journey is the main reason I pursued Tippett for ‘Then & Now.’ It’s worth noting at this point that finding out if a potential speaker is even available to attend an event is tricky. These artists are busy, and you are asking them to give up their valuable time. You also have to plan early – I asked Tippett in August last year – and you have to be prepared for conflicting schedules. Luckily, the stars aligned, and Tippett said yes. His talk is called ‘Lessons in motion: Star Wars to Starship Troopers, and Beyond.’

My next challenge was asking Chris Wedge to attend. Undoubtedly, readers will be familiar with Blue Sky, the studio behind Ice Age (which Wedge directed) all the way up to last year’s Oscar-nominated Ferdinand. But perhaps not everyone would be aware that Wedge – and other Blue Sky founders – have had an even longer and influential career in computer graphics.

Wedge scored a job in the early 1980s at MAGI, one of the studios that contributed some of the earliest cg visual effects seen on film for the movie Tron (1982). MAGI shut down, but Wedge and some other colleagues formed Blue Sky Studios in 1987 and continued developments in the area of photorealistic animation with proprietary software that became known as CGI Studio. After making their name in commercials, the studio worked on some significant visual effects projects, while Wedge also worked on a cg animated short film called Bunny, which would go on to win an Academy Award in 1999. Eventually – after some changes in the approach to vfx by Blue Sky’s parent company Twentieth Century Fox – the studio set to work on an animated feature; that was Ice Age, which became a breakout for Blue Sky in 2002.

So, Wedge’s experience in those early days of cg, leading into the still early days of digital visual effects, establishing a proprietary animation pipeline, and giving birth to the studio’s first animated feature – and many since – were all topics I was hoping the director could touch on at FMX (Wedge even dipped his toe into live-action filmmaking more recently with Monster Trucks).

Nailing down a busy animation studio co-founder was not a simple task, and Stuttgart is not a quick flight away. But Wedge agreed to come to FMX and reveal the technical and creative aspirations of Blue Sky, back at its formation and into the future. I’m looking forward to his ‘Bringing up Blue Sky’ session.

As planning for FMX continued, my morning of ‘Then & Now’ talks on Friday, April 27th, in Stuttgart was expanded to include an animation directors panel featuring Wedge, Sony Pictures Animation’s Shannon Tindle and The Simpsons’ David Silverman. This panel is all about what is actually involved, day to day, in the life of a director on an animated project.

As I spoke to each director about this session (called ‘Masters of Animation: Directors Discuss the Craft’), they each wanted to make sure it could be a way to dispense some practical advice. You might even hear some stories from the real trenches of animation. Getting a chance to absorb those kinds of anecdotes is, in my view, one of the best reasons to attend any conference like FMX.