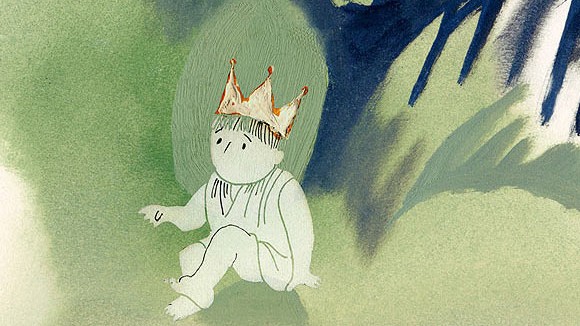 A newly restored version of John and Faith Hubley’s exquisite animated documentary Of Stars and Men (1964) will debut next Tuesday, October 22, as part of the Museum of Modern Art’s To Save and Project. MoMA puts on the festival annually to showcase recently preserved and rediscovered cinematic masterworks on 35mm and 16mm celluloid prints.

The screening will feature restored prints of the Hubley shorts Eggs (1970) and Urbanissimo (1967) alongside Of Stars and Men, a singular and stimulating 53-minute animated film based on the book of the same name by astronomer Harlow Shapley. The festival website describes Of Stars and Men as an “anecdotal inquiry into the origins of man and the structure of time and space [that] is one of their finest achievements, a triumph of multilayered graphic textures, abstraction, coloration, and wry humanism.”

The program will also feature a discussion between filmmaker Emily Hubley (daughter of John and Faith), historian and filmmaker John Canemaker and astronomer Dr. Charles Liu. The program will begin at 7pm at MoMA (11 West 53 St in Manhattan). Tickets can be purchased on the MoMA website.