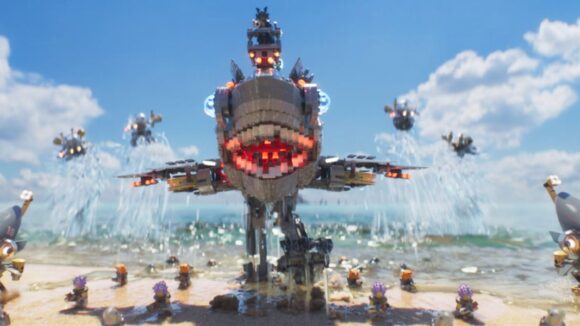 The various Lego movies released so far – The Lego Movie and The Lego Batman Movie – have brought audiences worlds built completely in cg brick form. But the newest Lego film, The Lego Ninjago Movie, directed by Charlie Bean, Paul Fisher, and Bob Logan, called for something much closer to the real world.

That’s because one of the conceits of the movie is that it plays out on the Island of Ninjago, a place made of Lego that also had to feel like it might be the vast backyard of a child playing with Lego characters. The studio behind the production, Animal Logic, therefore had to imbue the cg and effects for things like water, sand, explosions, and fire in Lego Ninjago with a much more real world feel than they had done previously.

A trip to the ocean

Water was one of the first things the studio tackled, since the island would feature a beach, waterways, and also characters emerging from the ocean. Certainly, simulating water is something now done relatively easily in computer graphics, but Animal Logic had to investigate how water at a real world scale would appear compared to the small size of Lego ‘minifig’ characters and mechanical vehicles called mechs that appear in the film. So they devised a couple of tests – inside and outside their Sydney studio.

“We happen to have a number of fish tanks here,” said Green. “We filled them up with water, and we went to the art department and kindly asked them for their prototype mechs and subsequently dipped them into the tanks, and pulling these things out just to watch how the water runs off.”

Artists would closely analyze the footage of these tests, which also involved ‘spritzing’ minifigs and mechs with water bottles and using watering cans to simulate rain. The tests were shot on DSLRs and GoPros, sometimes at high frame rates, just to establish what happened when water and Lego interacted. “You think you’d get these beautiful drips, but in reality because Lego is plastic and shiny, the water runs off incredibly quickly,” Green noted. “It just sheets off pretty much the moment it’s out of the water, and then you get a few drips. We ended up keeping the look of water droplets on them where we could.”

Located in Sydney, Animal Logic also took advantage of being very close to the beach. It was in the ocean that the FX team wanted to see what the effect of lapping water and wave foam and bubbles would have on the Lego characters. Again they took down some concept minifigs and mechs and submerged them in the water.

The results, while incredibly useful, were almost disastrous. As the Lego characters were only concepts, their decals were not secured with final permanent stickers. “We didn’t realize that at first so a lot of the stickers started to peel off,” said Green. “We were freaking out because they were only concept Lego! We even got this video of one of our artists running past the camera and running into the waves to rescue this minifig with a custom-printed hairstyle and decals, which are all fading and coming off in the water.”

The tests, however, gave significant insight, not only for water interaction, but also sand. It showed Animal Logic how grains of sand would move around minifigs, what size they were, and also how wet sand would compress and move under the minfigs and mechs.

“Many people would know about the footprints left in the sand and how with wet sand it returns back to its shape,” said Green. “But when you dip a minifig in, it won’t leave any footprints because the size of its feet are so tiny and the surface tension of the water just pulls it flat.”

On a live-action feature film, particular stunts might include pyrotechnics and fiery special effects. Sometimes these are also generated for visual effects, either to composite into scenes or as reference. Animal Logic set out to create its own pyrotechnic reference, too, given there would be a few fiery battles in Lego Ninjago. But they immediately came up against a few safety issues.

“Where we are in Sydney, there had been a bunch of fire bans after some hot weather,” said Green. “So everything was on high alert. We suggested lighting some small fires but even that was banned. What we ended up doing was collecting video reference from the internet.”

One character in particular, Kai, drives a red mech that has flame throwers. For that kind of fire, Animal Logic found reference of people lighting aerosol cans, relying mostly on anything recorded in slow motion. “We were watching those videos just to see how fire emits and rolls out,” said Green. “We also watched some crazy people with their homemade flame throwers. They’re very, very dangerous! But with all flame throwers, whether large or small, there was a liquid or a gas that comes out, and you get a bit of particulate emission that comes out and doesn’t always ignite so it just drops off like liquid, and we wanted to incorporate that.”

Battle scenes called for ‘fish’ missiles to be fired by the evil Garmadon’s army. Looking for the right kind of look of missile trail smoke, Animal Logic discovered the existence of homemade matchstick rockets in Youtube videos. These rockets are essentially matches wrapped in foil and lit at one end so that they travel through the air. “They produced these amazing, beautiful trails,” said Green. “So we used those for the fish rockets. It just had this lovely thin, nice smoke that diffuses off the back of them and curls around.”

Some additional flame reference came from tea light candles which Green set up in his backyard (where there were no security restrictions). “There were some sequences where the ninjas go into the jungle and they come across an army of generals who are carrying matchsticks,” he said. “We used the tea lights for reference of how much a flame wobbles, how big the flame was compared to a little ninja or a little minifig’s head.”

Animal Logic used Side Effects Software’s Houdini to simulate the effects in the film; in particular, water, fire, and smoke. In the previous Lego films, fire and even water had actually been constructed from brick ‘particles,’ but in Ninjago it was simulated as the real thing. However, there were some restrictions.

“For fire,” explained Green, “we could have that going over things but we weren’t actually allowed to burn anything or show any destroyed bricks or anything that looked toxic. So we never actually melted any bricks. What we actually did was, when the flames simulations were run over bricks, we would transfer the heat and the temperature onto the bricks and then we would actually just iterate through the various brick colors.”

Even then, Lego closely monitors the color IDs and palettes that can be used for bricks in its films. So as something burnt or a flame went over the bricks, Animal Logic would transition the colors through the material IDs for the ‘legal’ colors closest to a burnt color. It ultimately provided some interesting effects.

“A box would blow up or an explosion would go off or a flame would go over the bricks and you would leave a trail of black bricks,” said Green. “But we might subdivide the bricks into smaller bricks and jitter them to show that they had been affected, but we wouldn’t melt them.”

Another restriction in simulating effects for Lego Ninjago came in the form of scale. Effects artists are generally used to simulating things like water and fire at large scales, say on giant robots, by slowing the simulations down. This helps sell the larger scale. It was something they couldn’t do for minifigs and mechs.

“In the Lego world, they’re tiny little effects,” noted Green. “The truth is, if you watch any of these clips of people lighting flame throwers, they’re over in seconds and they dissipate, they move very quickly in relation to the characters, so we had to maintain that sort of speed and sense of scale with our effects work.”

The final issue came in terms of animation. The Lego movies have established a ‘stop-motion’ feel, and that was preserved in Lego Ninjago with animation done mostly on 2s to replicate a slightly stuttery motion. But when Animal Logic had to incorporate natural effects like water, fire, ice, or smoke, animating those effects simulations on 2s typically did not work.

“We came to a compromise with the animation team that they’d animate those scenes on 1s, or just as fluidly as possible, but definitely never on 3s or 4s,” said Green. “If a character or a mech’s arm was jumping around frame to frame, you would almost get misalignments with the animation of the flame throwers, for instance. The flame would suddenly have to move and jump and it really didn’t look nice, so we always tried to get them to have smooth animation for us.”

Each Lego film has presented Animal Logic with new challenges, and Lego Ninjago not only had the natural phenomena to deal with, but also a photorealistic cat. There are at least two more underway – The Lego Movie Sequel and The Billion Brick Race – ensuring that the studio will have a chance to be challenged again, and continue to test the limits of its animation capabilities.