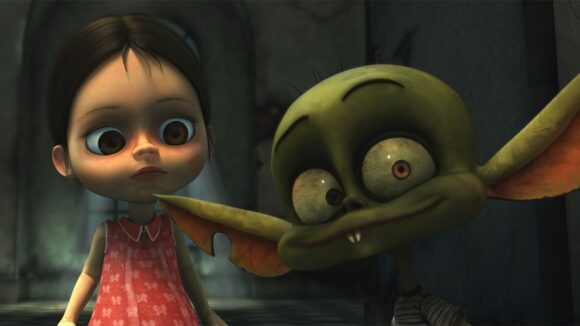 After many years of waiting, Mexican audiences had a chance to see Ana and Bruno at the closing ceremony of last month’s Morelia International Film Festival, the same festival where Pixar’s Coco had its world premiere.

Ana and Bruno, which premiered at this year’s Annecy animation festival in France, is the long-awaited debut animated feature by director Carlos Carrera, a cg horror movie for children that also seeks to challenge viewers’ stereotypes of poverty and mental illness. Carrera, who is widely regarded as one of the most respected Mexican filmmakers of his generation, recently spoke with Cartoon Brew about his approach to animation, the difficulties and delays in creating Ana and Bruno, and his hopes for the future of Mexican animation.

Ana and Bruno is an adaption of the novel Ana by Daniel Emil, which tells the story of a child escaping from a mental hospital, helped by the imaginary creatures that stalk the residents. The film was lauded during production by influential filmmakers like Guillermo del Toro and Alfonso Cuarón, building the expectation that the movie would be a landmark in Mexican animated film production.

Carrera’s dream of becoming an animator preceded his career in live-action filmmaking. “Being a little socially awkward,” he told Cartoon Brew, “led me to believe that directing animation fit my personality better than live-action. My intention was to create films on my own without involving a large staff.”

Carrera studied film direction in Mexico during the 1990s and created several animation experiments in Super8, but he realized that animation production in Mexico was still in its infancy and wasn’t ready for independent creators at the time.

In the end, it was easier to debut as a live-action director, which he did with the 1991 feature La mujer de Benjamín, followed by a varied and original filmography that includes the Oscar-nominated The Crime of Father Amaro (2002), which on its release became Mexico’s highest-grossing homegrown film ever, a distinction it retained for a further 11 years.

But Carerra never forgot animation and occasionally returned to it for short films like El héroe (The Hero), winner of the Cannes Short Film Palme d’Or in 1994. And the animation influence worked its way organically into his live-action productions. “When developing my live-action movies I tend to include many tools that are more commonly used in animation, like the storyboard,” Carrera says. “Also I often sketch the characters’ features as I imagine them, then try and find actors that resemble my drawings.”

Asked if he considers himself more of a live-action director who directs animation or vice versa, Carrera explains that he sees little distinction between the two, though animation production seems to please him more. Animation and live-action have the same artistic and expressive potential, according to Carrera, but animation is the format that allows the filmmaker to most accurately present the ideas formed in their imagination.

Ana and Bruno’s aesthetic is a quirky meld of graphic influences, somewhere at the crossroads of Looney Tunes, European animation in the vein of Jan Svankmajer and Berthold Bartosch, and the work of Mexican painters like José María Velasco and Saturnino Herrán. “I always come back to the same kind of characters and environments,” Carrera says. “They are part of the running themes that appear in my movies, as well as my preference for somber stories filtered through black comedy.”

However, Carrera rejects the suggestion that the film could be read as a political or social statement about Mexico’s problems. “It’s a universal story that works on several levels,” he says, “and only happens to be located in Mexico. For this reason the movie carefully avoids all the corny stereotypes relating to Mexican culture.”

Work on Ana and Bruno started in 2010 with 40 animators from the Mexican studios Lo Coloco Films, Grado Cinco, Ítaca Films, and Ánima Estudios. The production schedule was initially set to conclude within four years, but in 2012, creative differences with one of the co-production companies led that company to pull its funding, and put the film’s production schedule in limbo.

Carrera acknowledges that the financial issues stemmed from a clash of creative visions, highlighting one of the difficulties often faced by creators with highly stylized artistic tendencies. “Unfortunately, my artistic and narrative ideas were not always shared by the studio managers that funded the film,” he says.

Eventually, intervention by the Mexican studio Altavista put the production back on track in 2014. But the problems weren’t over yet. During the two-year standstill, half of the team had left to work on other feature film projects. To further complicate matters, most of the production had been created using outdated technology, and the new team had to spend a large amount of time and energy adapting it to new software. Even after completing the movie in March 2016 for US$5.3 million (four times the average budget of a Mexican feature film), the movie still doesn’t have an official release date in its country.

Although Carrera doesn’t have a clear image of where Mexican animation is heading, he hopes other producers recognize the necessity of pursuing more original stories that diverge from mainstream tastes. “Our industry needs to find an identity that sets it apart from the usual fare plagued by poor storytelling and fall backs to silly gags. Our movie Ana and Bruno is a film for children, which adults can also enjoy thanks to the layers of complexity in the story.”

Big expectations for Ana and Bruno have brought hope for Carrera’s next projects. “If everything goes well,” Carrera says, “I have two more animation films in development. I am about to finish the storyboard for my second animated feature Los Ladrones de Almas (The Soul Thieves). I am confident that Mexico is going to be a breath of fresh air on the international animation scene.”