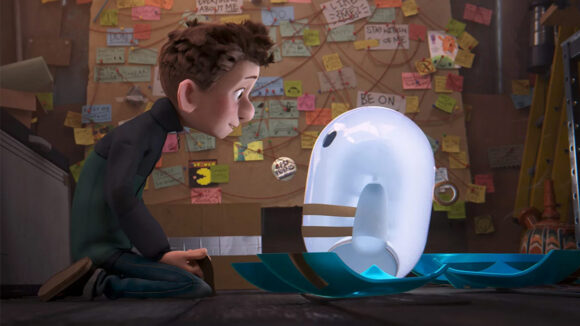 Ron’s Gone Wrong might not be on your radar yet, but it will be after today, now that the first trailer is out.

The set-up is simple: Barney, a socially awkward middle-schooler, gets the latest tech gadget, a digitally-connected robot toy called a B-Bot, but his B-Bot, Ron, isn’t programmed correctly and constantly malfunctions. Watch the trailer below:

The film appears to belong to the kid-befriends-robot genre, which includes titles like The Iron Giant and Big Hero 6, as well as more recent entries like Next Gen and, to some extent, The Mitchells vs. The Machines. But though the premise is familiar, the execution here shows potential: the comedy in the trailer is sharp, the premise is well set up, and the production looks tip-top.

Produced by London’s Locksmith Animation, Ron’s Gone Wrong was intended to mark the beginning of a new line of Fox Animation features that would complement its output from Blue Sky Studios. That all changed though after Disney’s purchase of 21st Century Fox in 2019. Disney proceeded to dismantle Fox Animation, shut down its subsidiary Blue Sky Studios, and Locksmith’s deal with Fox collapsed. Locksmith has since signed a multi-film deal with Warner Bros.

Ron’s Gone Wrong, however, was caught up in the corporate turnover, and Disney ended up with the film. It remains to be seen how much effort they’ll put into promoting it, but Disney did premiere the trailer this morning on Good Morning America, which airs on the Disney-owned ABC network. Ron’s Gone Wrong will open in the U.S. on October 22 through Disney’s 20 Century Studios.