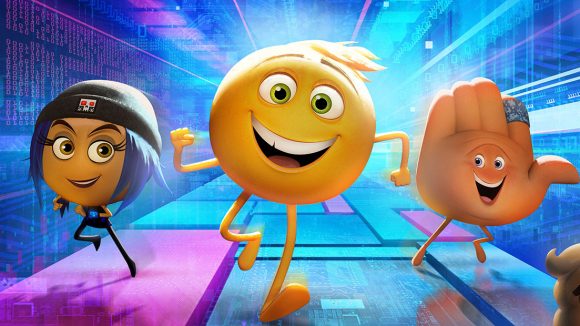 Sony Pictures Animation today started its promotional push for Emojimovie: Express Yourself by releasing new story and casting details as well as an image of the main characters.

Emojimovie is hoping to follow in the footsteps of WB’s The LEGO Movie (and not Sony’s own Pixels) and overcome its early critics who have ridiculed the film’s elementary underlying concept. The film will tell the story of Gene (voiced by T.J. Miller), a multi-expression emoji who stands out from the other single-facial-expression emojis because he was “born without a filter.” He enlists the help of his friend Hi-5 (James Corden) as well as codebreaker emoji Jailbreak (Ilana Glazer) to help him become “normal” like the other emojis.

The journey to normality involve threats to the entire emoji universe, a character named Poop Daddy (see image below), and traveling through different mobile apps, the latter being a plot device that can be seen as either a 90-minute commercial for mobile apps or, as Sony puts it, an “app-venture.”

The film’s theme is not-so-subtly hammered into the subtitle: “Express Yourself.” This isn’t just mindless entertainment, Sony seems to be telling us. Audiences will receive an inspiring message about self-improvement alongside Poop Daddy’s antics.

“Over six billion emojis are texted every day, and emojis have become a universal language that transcends age and culture. The power of emojis is that they allow you to express yourself in a fast and very fun way, and that is what our movie is about: self expression. We are very lucky to have some of the smartest and funniest actors today bringing their unique voices to this movie.”

Columbia Pictures will release Emojimovie: Express Yourself in U.S. theaters on August 11, 2017. It remains to be seen how audiences will express themselves at the box office.