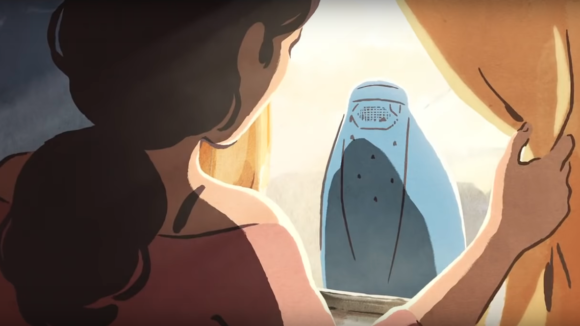 Ahead of its world premiere at the Cannes Film Festival next week, the first English-subbed trailer for French animated feature The Swallows of Kabul (Les Hirondelles de Kaboul) has been released.

Directed by Zabou Breitman and Eléa Gobbé-Mevellec, the the watercolor-styled hand-drawn film will debut in the festival’s Un Certain Regard section.

Adapted from Yasmina Khadra’s 2002 novel of the same name, the project is a France/Luxembourg/Switzerland co-production, led by French studio Les Armateurs, and including the participation of Mélusine Productions, Close Up Films, Mystéo, and Hildegarde.

The trailer showcases the hand-crafted animation used to tell a adult-targeted story that seems to be emotionally charged and grounded in realistic drama.

A few years back, Nora Twomey’s The Breadwinner also tackled the horrors committed against women in Afghanistan during the Taliban rule, however, the Cartoon Saloon production featured elements of fable and magical realism. These don’t seem to be present in Breitman and Gobbé-Mevellecthe’s more solemn feature.

Summer 1998, Kabul is in ruins and occupied by the Taliban. Atiq and Mussarat have been married for many years and now barely talk to each other. He can no longer stand his life as a guard in a women’s prison. She is dying, suffering from an incurable disease. Mohsen and Zunaira are young and love each other deeply. In spite of the violence and poverty which prevail in their daily lives, they want to believe in a better future. Sadly, Mohsen commits a foolish act which transforms their destiny into tragedy.

Cartoon Brew has been reporting about the project since 2017 when the first test teaser was released.

The Swallows of Kabul will open theatrically in France on September 4, 2019 through Memento Films. Celluloid Dreams is the international sales agent.