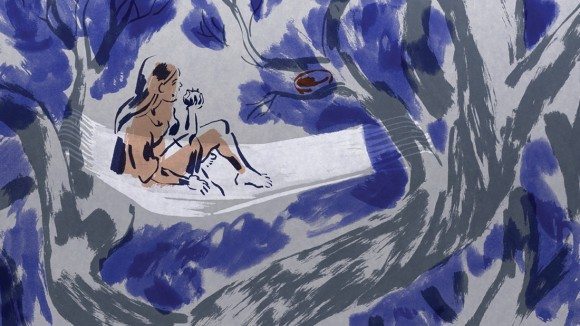 Most of the animated films that GKIDS acquires for distribution have undeniable artistic merit, but its latest pick-up, The Girl Without Hands (La Jeune fille sans mains), might be among its most experimental and adult acquisitions, pushing the envelope for the type of animation that the already-daring distributor has made available to American cinemagoers.

Written and directed by French filmmaker Sébastien Laudenbach, the 76-minute feature is an adaptation of the Brothers Grimm fairytale about a girl sold to the devil by her father, who ends up having her hands cut off. The film uses a distinctively uncompromising and sophisticated graphic style, more common to short films than features, emphasizing line drawing over rendered figures. Facial features are suggested with spare brushstrokes, and figures are often drawn incomplete (though it all makes perfect sense when the drawings are viewed in motion). To get a sense of how unconventional the film’s style is, just take a look at these four consecutive drawings of the main character: “The film has an utterly transporting beauty and poetry, while the story unfolds with the powerful dream logic of a fairytale, taking you into the darker, deeper, primal origins and emotional core of the Grimm’s tales,” said GKIDS co-founder Eric Beckman. “With magic and cruelty, sublime beauty and tenderness, The Girl Without Hands is at once timeless and unlike anything you have seen before, a stunning example of the potential of the medium of animation as a powerful cinematic art form for adult moviegoers.”

GKIDS will release the film in North America at a yet-to-be-announced date. The deal was negotiated with Pyramide International, one of the top art house distributors in France, which acquired world sales rights to the film last month. It’s a unique pick-up for Pyramid, too, marking the first time that they’ve ever sold an animated feature.

The Girl Without Hands premiered last week as part of the ACID program in Cannes, a parallel selection of films that is independent of the Cannes Film Festival and aims to support emerging filmmakers and independent works that might be overlooked by the main festival. Laudenbach’s film will next screen in competition at Annecy.

Laudenbach, who is making his feature-length debut with this project, has been directing animated shorts since the ’90s, including films like Les yeux du renard, Journal, and Vasco, which is embedded below: