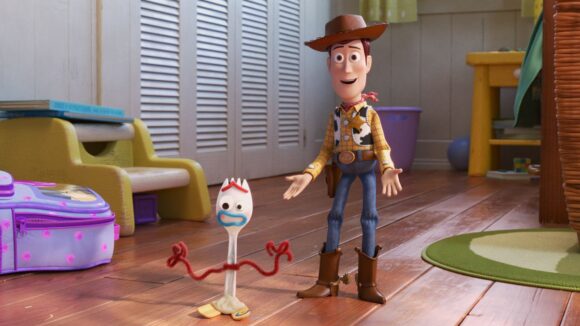 The fourth installment in Disney-Pixar’s Toy Story franchise arrives in theaters this weekend nine years after its Oscar-winning predecessor and nearly a quarter of a century after the original film broke ground in cg animation.

While many were skeptical about another sequel following the neatly wrapped ending of the trilogy, Toy Story 4 has put those trepidations to rest, winning over critics and aiming for infinity and beyond at the box office. After 236 reviews, the movie currently holds a 97% rating on Rotten Tomatoes.

The film series’ longevity is such that it will likely attract scores of adults who grew up with the previous chapters, many of whom may be bringing their own children to see the latest one. Few products are as four-quadrant-friendly as Toy Story is, and that could result in a major box office milestone for animated films during opening weekend. Analysts estimate Toy Story 4 will gross somewhere between $160 million and $200 million in the U.S. and Canada from 4,575 screens. If it ends up at the top end of those estimates, it could become the biggest debut ever for an animated feature, beating out last year’s record $182.6 million opening for Incredibles 2.

Internationally, it will open day-and-date across 37 territories, about two-thirds of the foreign markets, and could pull in an additional $100 million.

Originally, Toy Story 4 was to be directed by former Pixar creative chief John Lasseter, but it was eventually handed to animator Josh Cooley to make his feature directorial debut. The directorial switch was made long before Lasseter was forced into a sabbatical at Disney and Pixar for sexual misconduct claims. Over his 15 years at Pixar, Cooley has become a trusted member of the studio’s creative team, both as a writer and storyboard artist, and notably co-wrote the screenplay for Pete Docter’s Inside Out.

As previously reported on Cartoon Brew, Toy Story 4 was pushed back repeatedly from its original release date in 2017 to 2018, and again, to 2019. Screenwriters Rashida Jones and Will McCormack left the project in a very public split in November 2017, citing “creative and, more importantly, philosophical differences.” And producer Galyn Susman was swapped out for Inside Out producer Jonas Rivera and Inside Out associate producer Mark Nielsen. Peter Docter, Andrew Stanton, and Lee Unkrich executive produced the film.

There are eight writers with a “story by” credit for Toy Story 4, while only Andrew Stanton and Stephany Folsom are noted as the film’s screenwriters. Cases of too man cooks in the kitchen have yielded terrible results for Pixar before, like with 2015’s The Good Dinosaur, but that doesn’t seem to be the case here despite the bumpy road traveled.

Reception has been overwhelmingly positive on the critics’ behalf, with many citing the sentient spork Forky, one of the many new characters, as a highlight. Although many expressed they were afraid this sequel could taint the franchise’s legacy, they nearly unanimously agreed that Disney-Pixar managed to deliver something at once familiar and inspiredly inventive.

Here are some takes on the film from critics at major publications:

Dana Stevens of Slate felt positive about the fourth film in the franchise, but suggested it might be a good idea for Disney to finally put it to rest:

The first Toy Story movie, which was also audiences’ first introduction to the novel sensibility and animation style of Pixar Animation Studios, came out nearly 25 years ago; many of the children whose parents took them to watch it then may be bringing their own kids to theaters now. As the past two installments of the series taught us, it’s hard but important to know when it’s time to say goodbye to beloved childhood artifacts. Pixar itself may be ready to learn that lesson, if its corporate parent, Disney, is ever able to pry this lucrative franchise from its tighter-than-a-pipe-cleaner grip.

Writing for Entertainment Weekly, Darren Franich wasn’t entirely impressed with the end result, but expressed certainty that it will still become a financial success for the studio:

Is this a cash grab? Toy Story 4 doesn’t hit the emotional highs of the previous films. There are good jokes that work and heist setpieces that don’t. The ending is moving, though now you distrust any finality with this saga. It does feel a bit cheap, somehow: Another movie drifting melancholy off forgotten toys, from a 25-year-old multimedia franchise starring global icons preparing to gross yet more multigenerational billions.

The signature Toy Story wit and irreverence might not be quite as sharp as it was before, but there are enough truly inspired moments to keep you smiling as you savor the unexpected fun. Cooley and the writers even brilliantly play on some kid-friendly horror movie tropes, adding a fresh dimension to this journey.

For Los Angeles Times, Kenneth Turan noted the quality of the film’s photorealistic animation and the genuine emotion the story conveys:

Though the previous films were known for their visual inventiveness (the original was the very first computer-animated feature), Toy Story 4 boasts animation so vivid and polished it makes its characters realer than they’ve ever been. Best of all, as written by Stephany Folsom and the veteran Andrew Stanton, the film surprises with the amount of genuine emotion it generates with its focus on love, loyalty and what matters most in life, to humans as well as toys.

Writing for The New York Times, Manohla Dargis likened the animation’s textures with the simple joys of childhood:

In the almost quarter of a century since this series began, Pixar’s animation has grown more complex and its worlds more lifelike. There’s a real wow factor to the studio’s renderings, to the graphical details and spatial dimensionality that persuasively suggest quotidian existence and our own chairs, floors and trees. This photorealist quality can make you wonder what you’re looking at. (In digital cinema, life and animation blur.) At times, there’s something deeper here, too, as when the visuals suggest textures that you can almost feel in your fingertips, a sense of touch that awakens memories of the smooth plastic and nubby cloth of your own favorite childhood plaything.

For The Hollywood Reporter,Todd McCarthy wrote about the talents that collaborated to deliver yet another hit sequel:

Ultimately, what gives Toy Story 4 genuine heft is that it’s a tale of second chances and characters who take advantage of them. Like its predecessors, the film is rambunctious, noisy, genial, unpretentious, action-packed and old-fashioned in a very good way. After a nine-year wait, it’s gratifying to see original Pixar hands like Stanton, executive producers Lee Unkrich and Pete Docter and composer-singer Randy Newman collaborating at their usual high level with relative newcomers, most notably director Josh Cooley, who worked his way up through the ranks at Pixar for 15 years, toiling in the art department there on five films, helming two shorts and co-writing Inside Out.