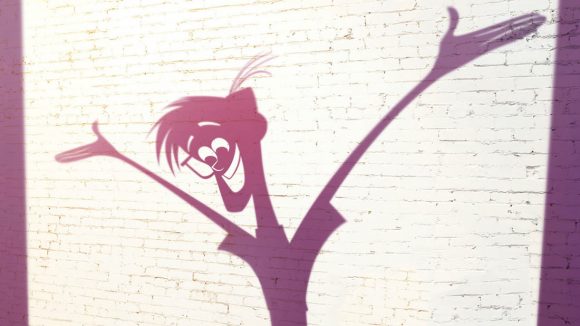 Of all the cancelled Dreamworks films over the past few years, the one that has perhaps generated the most enthusiasm amongst fans has been Me and My Shadow, the mixed-media project that was to have combined hand-drawn and cg animation.

At various times, the film, about a shadow who took control of his owner’s actions, had Alessandro Carloni (Kung Fu Panda 3) and Mark Dindal (The Emperor’s New Groove) attached as directors. More recently, Shaun of the Dead director Edgar Wright was developing a shadow-themed project for Dreamworks that had been described as “a new approach to a previously developed concept.”

Not many visual elements besides a poster have ever been released from the film, so it’s a real treat to see veteran animator Matt Williames post some animation from the film on his personal Tumblr. For ease of viewing, we’ve compiled the clips into a single video below [Comcast-NBCUniversal blocked the Me and My Shadow clips from Youtube. They can still be found at their original source: animator Matt Williames’ Tumblr.]

“This was the most fun I have ever had on a feature film,” Williames wrote. (Other films he has worked on include The Princess and the Frog, Coraline, The Spongebob Squarepants Movie and Looney Tunes: Back in Action.) “Definitely the most talented animators I have ever worked with in my career. It was a great, small crew where we were all given a certain level of freedom. I was going to be the lead on the villain of he film but sadly it was canceled before I could start my first shot.”

The first shot in the clip is from an inked-and-painted version before lighting. The other shots in the clip are from what Williames explains is a “shadow cam view”:

The camera was adjacent to the floor to give the animator a flat surface to draw on top of. Once we had ruffed in a shot the shadow cam would then be projected in the final “shot cam” where the drawing would partially deform around anything it was projected across. It made animating him so much simpler for us. The one consistent challenge was eye-line and making sure it looked like they were looking at each other.