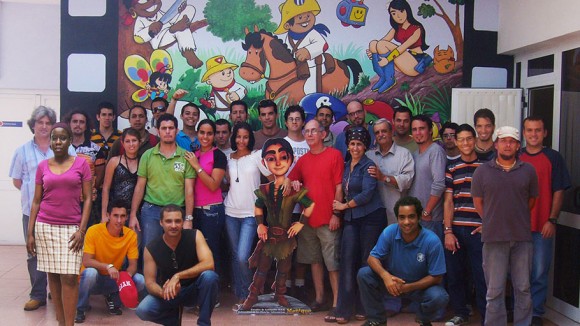 With President Obama’s historic declaration that the United States and Cuba will resume normal diplomatic relations, as well as animation’s increasing growth and popularity in Central and South America, now is a better time than ever to explore the tiny island nation’s animation situation.

“The biggest challenges facing today’s animation industry in Cuba is the lack of technology, and the obstacles that exist to obtain it,” Cuban-born animator Jerzy Perez told Cartoon Brew. Perez, who now resides in the United States, was the animation supervisor of the country’s first CGI feature, Tom Little and the Magic Mirror (Meñique y el espejo mágico).

“Until the release of Tom Little in 2014, making CGI animation in Cuba caused terror, mainly for the cost and technology that making that type of film requires,” Perez said. “Cuban films are rarely made with the idea of being commercial, but I believe this mentality has begun to change.”

What is sparking that change is growing international interest in Cuba’s budding animation industry, which in turn is evolving the nation’s technological expertise. Known in the U.S. as The Princess and the Magic Mirror, the uneven but momentous Tom Little was co-produced by Spain’s Ficción Producciones and screened in parts outward like Europe, Dubai, and South Korea. Although the film was initially created using Autodesk Maya, because of licensing and American embargo issues the filmmakers had to suddenly switch to Lightwave, Perez explained, since Ficción already had the license for the software.

“It happened when the movie was about 60 percent done,” said Perez. “So in about one year, we had to transfer everything from one software to another. The programming team had to write the script for the transfer from scratch, because [Lightwave maker] Newtek didn’t have compatible plug-ins to do that.”

Perez also explained that it was an agreement with an Italian studio that led the Estudios de Animación at the government-run Cuban Institute of Industry and Cinematographic Art (ICAIC) to create 2003’s More Vampires in Havana with Toonz software. Lately, he added, Cuban animators have gravitated toward the open-source Blender 3D, although they’re also somewhat versed in Adobe Flash and Toon Boom.

Despite these advances, Cuba still has a way to go before it catches up with the international scene’s fluent use of animation technologies. But why go though the trouble of working in CGI at all, when Cuba has “a particular appreciation for hand-drawn animation,” according to John McIntosh, chair of New York’s School of Visual Arts BFA computer animation and visual effects department, who visited last year with animators in Cuba.

“The answer always resides in the fascination for what is new,” McIntosh told Cartoon Brew. “Cubans weren’t intimidated by technology, although they struggled with elements of production that we would never consider an issue. But they were determined to make Tom Little and succeeded, which is completely impressive and reminded me of the early days of CGI in America, when we hammered at the smallest problem until we could make it work.”

“Both traditional and 3D animation in Cuba have a serious problem: brain drain,” explained Pedro Miralles, a 3D animator working in Estudios de Animación—which, along with the Cuban Institute of Radio and Television (ICRT) and the Holguin-based studio Anima, are reportedly the only three places in Cuba creating animation. “New artists aren’t prepared, teachers are underpaid and not always working, and there is no career training.”

Artists in Cuba essentially have to learn peer-to-peer because “there is virtually no Internet to rely on for tutorials, no money to pay for online training, and a US embargo on all trade with Cubans,” says McIntosh. “Everything we take for granted from a Google search to buying a book is not readily possible.”

As a result, animators are making their way abroad. Jerzy Perez explained that he basically had to learn animation on his own, eventually giving up the pursuit of higher education to deepen his 3D skills in China. In 2008, he took his first professional steps at the Chinese studio Xing Xing Digital, working on Postman Pat and Fireman Sam, which turned out to be a crash course in what he calls the “beautiful but sometimes harsh reality of making animation.”

“I would call them animation factories,” Perez said, “but that may have to do with the acceleration of the Chinese economy and the need to make big profits at very low costs.”

The journey to Tom Little from early Cuban animation, which never went beyond primitive exercises, was a long one. The post-Castro takeover resulted in socially and politically conscious works like Modesto Garcia Alvarez’s Los Indocubanos and Jesus de Armas’s activist films, and made animation a “community industry [with] no commercial purpose,” said Perez.

Cuban cartoons fell out of international orbit until Juan Padrón’s feature Vampires in Havana arrived in 1985. Stop-motion standouts like Bárbaro Joel Ortiz’s 20 Years followed, as did intriguing mixed media shorts like Yemeli Cruz and Adanoe Lima’s The Moon in the Garden:

Cartoon life during the Cold War mostly involved educational reels with Cuban customs and traditions firmly in the frame, but still found competition in imports like Bugs and Daffy, as well as Iron Curtain fare like Gustavus and Nu, pogodi! More recently, blockbusters from Pixar, Dreamworks, and other high-powered studios have screened well (unofficially) with the Cuban public.

Cuban animators, therefore, share many of the same influences as artists in other parts of the world, and their animation industry has ambled along for much of the past century, but its development has occurred in fits and starts, which is what makes the production of an entire CGI feature a remarkable accomplishment.

Cuba’s CGI animation club was a lonely place until Tom Little and the Magic Mirror showed up. But the nation is quickly updating its digital techniques, in response to the high material cost of hand-drawn animation. “With digitization, animators just need a computer, an image scanner, and software,” said Perez.

“I think the Internet will exponentially develop our animation,” said Parilles. “In Cuba, there is almost no Internet, despite the need to advertise businesses, products and services.”

The ICAIC reportedly plans to further strengthen its support of animation as a career. Although the state-run Estudios de Animación’s once-free workshops have started to charge fees, they remain cheap compared to anywhere else in the world. Tom Little director Ernesto Padrón has lately led efforts to create an International Film and Television School at the ICAIC; for Tom Little, Padrón and crew trained many artists “in the technical and artistic specialties of 3D animation,” said Perez.

Soon more animators, armed with more digital films, could start showing up at ICAIC festivals like Cubanima and Muestra Juven. In other words, the industry in Cuba is expanding, while awaiting the dam between Cuban animation and the global animation community to break.

From John McIntosh’s perspective, it’s only a matter of time. “The Cuban artists are a brave and determined group. They are hungry for the information we can provide and when we are able to share freely, the work that will result will be amazing. I’m confident that once it is allowed open access to information and the Internet, Cuba will become the hub for Latin American film and animation.”