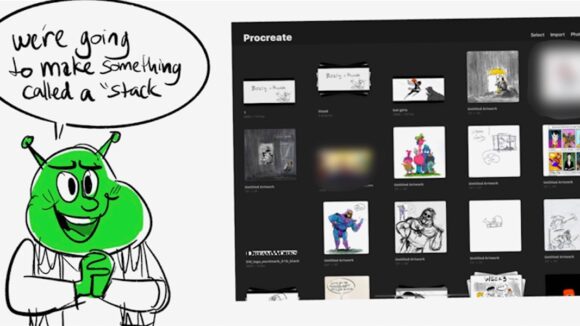 Lockdown has forced artists, like almost everyone else, to rejig their work set-ups. Colin Jack was prepared for this moment. The story artist was already using Procreate, the Ipad illustration app, to draw his storyboards. When suddenly confined to his home, he found that the flexibility of this approach suited him just fine.

Jack has now shared his insights with the community. In a document released via his Instagram (and also made in Procreate), he provides a straightforward illustrated tutorial to storyboarding on Procreate, explaining how the app can be easily integrated into the Photoshop workflow. With his permission, we’re linking through to his pdf here.

As a story artist for Dreamworks Animation, Jack has boarded for films including Captain Underpants, Boss Baby, Trolls World Tour, and the forthcoming The Croods 2. But he is also a prolific illustrator of children’s books (Dragons from Mars, the Galaxy Zack series), and it’s in this capacity that he first started using Procreate. Below, he tells us why the app doubles up so well as storyboarding software, and how it could be improved…

Cartoon Brew: Is using Ipad and Procreate a normal pipeline for feature animation storyboarding? If not, what is the standard pipeline?

Colin Jack: No, generally we use Photoshop or Storyboard Pro. I haven’t seen portable digital storyboarding fully embraced into the feature animation pipeline. It would be great for studios to find a way to bring it into the fold.

What are the benefits to boarding with Procreate, rather than a more conventional approach, like working on a Cintiq tablet with Storyboard Pro? What are the downsides? Would you recommend it only to people with a certain skill/experience level, or is that irrelevant?

The benefit to Procreate is how portable it is; it’s allowed me to work from the couch and in my backyard. Not having to be locked up in the office away from my family is a great plus. The downside to this, of course, is having to make sure I’m managing my time wisely. There are definitely more distractions when you can work anywhere.

I think skill level is irrelevant to using Procreate but I wouldn’t recommend it over a Cintiq — they both have functions the other doesn’t that benefit the user.

How does Procreate compare to other Ipad storyboarding apps, like Paper?

I have not tried Paper so I can’t speak to that comparison. I was using Procreate initially to illustrate kids’ books, and found a way to use it with storyboards, so I haven’t tried any other apps. To clarify: it isn’t actually designed as a storyboarding app, but I was able to work within the confines of the program to adapt it to my needs.

Procreate doesn’t currently have Android functionality. How serious a limitation is that? Do most storyboard artists have an Ipad/Apple hardware?

I can only speak to my friends and colleagues in the industry; most of them have Ipads and an Apple Pencil. I haven’t seen Android promoted to artists in the same way that the Ipad has been. And the truth is advertising works! I’m also unaware of Android having a stylus similar to the Apple Pencil, so most artists do tend to lean towards Apple products.

What features would you like to see Procreate add to make it a more a useful app for storyboard artists?

A batch renaming feature to make it possible to organize and renumber panels more easily. It would also be helpful if Procreate had a way to flip between panels while working. Right now, I have to draw in layers and duplicate my panels, then erase the layers I don’t need. This eats up time that could be better spent drawing.

Why did you choose to create this tutorial now? Was it in response to demand from colleagues?

I’ve been storyboarding like this for a while now, at least to rough it out and then send it to Photoshop after. When the shelter-in-place orders happened, it became a larger part of my routine while I was getting my home office set up. I had a colleague who wanted to try boarding on the Ipad and asked me for advice, knowing I did it regularly. I thought rather than trying to talk him through it, I’d use Procreate to make a basic step-by-step guide.

I wound up sharing it with a few more friends and colleagues to make sure that it was clear enough. Eventually, I shared it with the story department. That was way back in April, and I sort of forgot about it until I was nudged by a co-worker to share it on Instagram last week, for anyone else who may find it helpful.

How has the lockdown changed the way you and your colleagues board, if at all?

The actual act of boarding hasn’t changed. For those of us who worked in a studio, it might be an adjustment in terms of personal interaction and collaboration. We can’t knock on a colleague’s door and ask for feedback on the sequence we’re working on, or have an impromptu check-in with our head of story or director. The spontaneity of collaboration takes a little more planning these days.