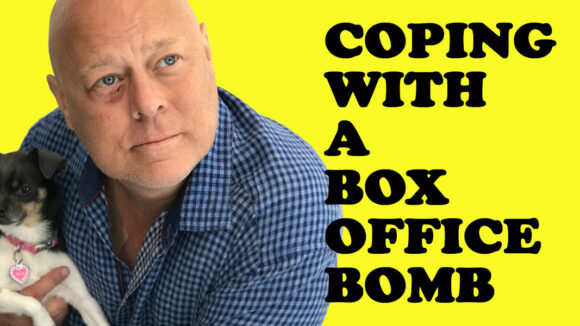 Kelly Asbury is a two-time Oscar nominated director of five animated features: Spirit: Stallion of the Cimarron, Shrek 2, Gnomeo & Juliet, Smurfs: The Lost Village, and Uglydolls. In his 37-year career in the animation industry, he has contributed artistically to over two dozen animated features, including Shrek, Toy Story, Frozen, The Nightmare before Christmas, James and the Giant Peach, The Little Mermaid, Beauty and the Beast, and The Prince of Egypt. In the following piece, Asbury speaks frankly about his emotional journey in recent years after his last two animated features underperformed at the U.S. box office. Here’s Asbury:

So far, within my thirty-seven year career in the Hollywood animation industry, I’ve directed five animated feature films. On the whole, as confounding as the “process” of such endeavors are, I look back at each of those experiences with more fondness than not. Contrary to what outsiders may think, making animation can be, well, grueling, and always is at some phase of production. Still, I can honestly state that one of the emotional hazards I’ve discovered about being an artist and/or director of any animated project, is the inevitability of taking everything about it into my heart. I believe that, particularly for a director, such a connection to the project is an inescapable job requirement.

For me, when a movie has reached its completion, I am always a proud papa who is excited to finally unveil a glorious piece of entertainment, having freshly been generated by a huge collaboration at every level, of magnificently talented artists and genius technicians.

But, always, that personal, prideful moment of accomplishment also means it is time to release our “baby” into the custodianship of the (regrettably) all-powerful “Box Office Gods,” who – in Hollywood at least – are all that really matter to the studio bosses, which I understand. It is their investors’ money on the line. Studios want a profitable hit. Heck, so do I. I openly own the fact that I want as many people to see our movie as possible – preferably on opening weekend, in a theater. However, I’ve learned more than once, enjoying a Blockbuster Success is never guaranteed. In fact, for me, it has recently been quite decidedly the opposite: I’ve directed two certified bombs in a row.

I don’t think of my first three directorial efforts – two partnered with a co-director – as having tanked. In fact, my second feature was, at the time, a true record-setting blockbuster. That one did not hurt at all and, yes, it spoiled me a little.

But my latter two efforts… man, they immediately sank like weighted dead bodies. In each case, I knew neither would garner Box Office Gold, but I thought they would at least enjoy a satisfactory level of profitability. Nope. Both were dismal non-starters.

The first time it happened, I guess I should have known better from the start. The movie was based on a tired franchise. Yep, I knowingly signed on to direct a movie which I was aware probably few wanted to see, but I needed the job, simple as that.

It was a difficult four-year production, but, as happens while making animated features, I made lifelong friends and, again, was gifted with the joy of working with top-notch talent. Animated projects form almost familial communities among the team (I prefer the word “team” to the oft used “crew” — I always hated being referred to as a member of the “crew;” it has a diminishing connotation), which is one reason the movies I work on so tightly stick to my gut. I fall in love with the people working on the movie as much, or more, than the movie itself. There have been plenty of times I wished I could somehow get through it all on some kind of less personal level, but I can’t. If being the director makes me “coach,” then I’m obligated to shoot for a winning season. I wouldn’t be doing my job properly if I strived for anything less.

So, our unwanted baby was cast into the universe, then fell violently to earth in a non-spectacular “poof!” All that work. All those hopes. All that talent. All that stress. All that effort. All that everything. And barely anyone came or cared – and, if they did care, they decided to wait for Netflix.

I could – and did at the time – blame all the many reasons why the movie failed: Bad release date. Bad marketing. Bad political climate. You name it, I blamed it. But, after a period of licking my wounds and getting real with myself, I landed at a place of personal comfort: It is okay if I still love the movie I directed, but I will never have any control over how anyone else feels about it. Audiences either want to go see a given movie or they don’t. In almost no case is that fact any different for any other movie. My theory here is proven every weekend of every year.

So, as the Box Office Gods would have it, my most recent film suffered an even worse fate than its predecessor. I truly – and lovingly – thought this latest one had a fighting chance at engaging families into giving it a fair shot. I could not have been more off the mark.

It hurt this time too, but, surprisingly to me, not as much.

This time around, I didn’t waste time playing the Blame Game. Hard fact: We built it and they did not come.

The team and I put everything we had into making the very best, most fun, entertaining animated movie possible under very extenuating circumstances: A moderate budget and a drop dead release date, which amounted to – I kid you not – one year to make it all from start to finish. Yes, there had been some pre-production material created prior to my joining up – and again, I needed the work, but also the “impossible” challenge intrigued me – but, much of that earlier development work was discarded toward a more straightforward, less complicated story. I implemented making it a musical, with the aim of being able to put those song-set pieces into production sooner – to “Feed the (production) Beast”- as we hammered out the surrounding story issues. But, the addition of songs did not make anything any easier for anyone. Suffice to say, it was a swift, yet achingly slow twelve months.

But, as always, when all was said and done, I was a beaming proud papa – and I still am. I love the movie and, as with all the movies I’ve worked on and/or directed, I always will.

Maybe next time, if I get another shot at directing, I will have artistically evolved to a place of not caring at all – or at least less – whether the movie makes money. After all, the real joy of working in my beloved animation industry is more about the funny anecdotes I can share from all the truly wacky experiences of past productions – and every movie has them.

Whomever first said, “The joy is in the journey” (I first heard it from the late, great story artist, Joe Ranft), was right. Next time around, come opening weekend, I will hold tighter to that wisdom.

But, if it bombs, it will still hurt.