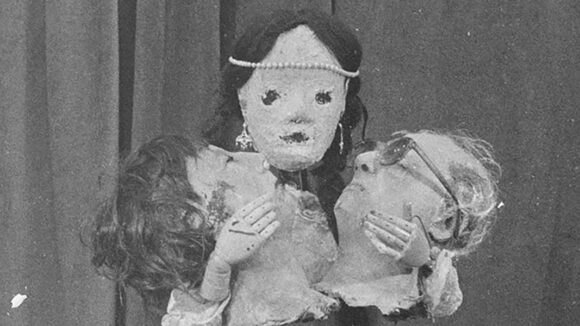 Los Huesos (The Bones), the new short puppet animation film by Chilean directors Joaquín Cociña and Cristóbal León (The Wolf House), is billed as a restored version of the first Chilean animation film.

Shot with a 16mm camera, this faux ‘restored’ film (executive produced by horror director Ari Aster and made in a year for only US$20,000) tells the story of a young woman who summons the help of spirits to bring two corpses (Diego Portales and Jaime Guzmán) back to life.

Combining dark, absurdist humor with Chilean political history, Los Huesos is a piece of creepy magnificence that beautifully captures the look, pace, and tone of early 20th-century animation films while slyly commenting on the socio-political state of contemporary Chile.

Premiering today at the Venice Film festival, Los Huesos’ directors Cociña and León spoke with Cartoon Brew via Zoom to discuss the origins of their fictional archival film.

Cartoon Brew: Which came first: a story or the concept of doing a fake archival film?

Cristóbal León: We never have just one starting point. We have a lot of ideas that we try to connect. Sometimes we forget about one idea, but it’s still there, you know. We have very confusing processes.

One of the starting points was that we were in the middle of a social uprising in Chile in 2019. We call it “Estallido Social” which means social explosion. We inherited the political system of a dictatorship. The gap between poor and rich people is wide. It’s a very unfair system. So, this was the context in which we started to think about this production. We took two figures of Chilean history, one from the 19th century and one from the 20th century. They were both defenders of the oligarchy. We wanted to get rid of these leaders somehow and liberate Chile from this oppression. Not that we are taking ourselves so seriously. It’s not like we think our film is going to change anything.

Joaquín Cociña: The other context was film history. We need to create a fake creative mind behind the film that is not us. It gives us more freedom and distance. We’ve also been interested in early cinema. At the beginning of the 20th century, there was this incredible creativity. There was Georges Méliès, a magician making fantasy films; then you had a more documentary-style approach from the Lumière brothers. Two different streams. We’re trying to approach projects thinking about those early years. With Los Huesos, the idea is very raw. We are pretending we are creating the first animation film. We thought it was funny to imagine that Chili was the birthplace of animation. We then thought of [Ladislas] Starewicz’s first films, made using animal and insect corpses. We thought they were beautiful. So we imagined that we were animating dead bodies in the early 21st century. We found that funny.

Speaking of corpses, non-Chilean audiences (like me) might not know who these two ‘corpses’ are from the film.

León: Actually, they are copies of our bodies. Joaquín is the guy who wears glasses. The other guy looks a bit like me, so we decided that I’d be that guy.

Joaquín Cociña: Diego Portales was a political figure who was a defender of the oligarchy near the end of the 19th century. He became sort of the hero of the right-wing conservative movement in Chile. He could have been President but wasn’t interested.

León: He was a businessman who used politics to make things easier for his businesses. We grew up during the Pinochet dictatorship in the 1970s. In our history books from that time, Portales was praised for bringing order to modern Chile.

Cociña: Jaime Guzmán [the figure with the glasses] was the brains behind the Pinochet dictatorship.

Is Constanza based on a historical figure?

Cociña: She was the mother of the kids of Diego Portales. She was 14 years old when they were having some form of sexual relationship. She had three kids with him. He never married her, which was a bad thing to do at the time. She was sick and locked up all her life. Her children were taken away. The story goes that she never stopped waiting for Portales to marry her.

What’s fascinating is that as deeply rooted as Los Huesos is within Chilean history, an international audience can still connect to the film on different levels. When I first saw the film, it triggered thoughts about the murders of Indigenous children at these horrible Canadian residential schools.

León: We wanted to make a film that is local but also universal. We designed Constanza with a Chilean Indigenous person in mind because we wanted that extra layer.

On a technical side, you did a remarkable job re-creating this so-called historical film. The lighting, character design, and pacing all bring to mind early animation films.

León: We animate only in camera. We don’t use any software. I love that dark room of the camera where you never know how it’s going to turn out. A 16mm camera is radical because you don’t know what’s going on. We enjoy accidents, bringing mistakes into the process. I enjoyed the mystery of not knowing what would come out of the camera.

Cociña: We also avoided rushing the cuts. In early cinema, the scenes are longer and often go on and on.

What was your approach in terms of music? How did Tim Fain end up part of the production?

Cociña: This was the first time we called a musician. In old films, music was performed live in front of the audience. We wanted to do something based on Chilean musicians of that time. Chilean musicians then were copying European musicians like Chopin. Adam Butterfield [who became executive producer] saw the film and wanted to be involved. He knew Tim Fain and recommended him.

Leon: Our only instruction was that it should be like Chopin but from hell. A very demonic and distorted version of Chopin. At one moment, I had an idea of tuning into a radio that plays stations from other dimensions.

For such a dark film, there is a lot of humor: a painting of you both as cavemen in one scene; visible puppet strings; wrong body parts on the corpses; private parts covered by a glove.

Leon: Almost all of our works begin with jokes. The truth is, I mean this honestly, we always want to do funny things, but the results are always terrifying. We seem to be bad comedians. But we will work on it. We try to have fun working. I am fascinated by artists who manage to combine comedy and horror, like Jordan Peele. I think art is very much about connecting emotions that seem separate.

Let’s end with everyone’s favorite question: what are you working on now?

Leon: We are working on a movie temporarily called Los Angeles, and it will be our first attempt to mix animation and live-action into a feature film. It is a film in which we try to revisit, in our way, the history of fantasy cinema, with its various techniques and aesthetics. We are in the stage of rewriting and searching for co-financing.