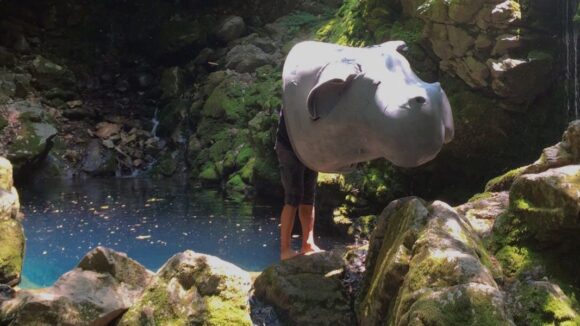 In covering visual effects projects here at Cartoon Brew we regularly speak to the visual effects supervisors and artists involved. But we don’t always get the chance to hear the director’s perspective on how he or she uses visual effects in the storytelling process.

That’s why we’re pleased to present this interview with Okja director Bong Joon-ho. His Netflix film, which was recently short-listed in the final 10 films for consideration for a best visual effects Oscar, features a major character that is completely computer generated.

Having previously dived into how that character was created with Method Studios visual effects supervisor Erik De Boer, we asked Bong what his experience with vfx had been like prior to Okja, and the vfx interactions he had during this latest production.

Cartoon Brew: What would have been your first experience using visual effects as a director?

Bong Joon-ho: My first experience with vfx was during my first feature film Barking Dogs Never Bite. There’s a scene in which the male protagonist throws a dog from the roof of an apartment building, and I used bluescreen for the first time in that scene. Of course it was imperative that no animals were harmed during filming, so we had safety measures for the actual throwing of the dog during the shoot. For the bluescreen shoot, the actor threw the dog onto a safety mat just a short distance below, and the actor and dog were later composited onto a multi-story apartment building through vfx. That was the very first vfx scene I tackled as a director, and it was during the early days of Korean vfx in the late 90s when the first vfx companies were emerging.

The Host had a fantastic creature largely brought to life with cgi. What did you learn on that film in terms of visual effects and creature animation performance that you were able to apply to Okja?

Bong Joon-ho: It was the first time I dealt with a cgi character, a creature, so I perused vfx magazines and also looked at other vfx-heavy films released during that time, like Hellboy and Lord of the Rings, for reference. At the time, Korean actors and DPs [director of photography] were likewise inexperienced with vfx shoots, so we used storyboards, pre-visualizations, and animatics to help them visualize. The actors were actually not that jarred by the experience of performing with an imaginary creature and got used to it in less than a week.

What were some of the first conversations you had with Method and Erik De Boer about how you wanted Okja to be brought to life, and how did this get refined over time? What kind of artwork, sketches, and models helped flesh it out?

Bong Joon-ho: I think the first thing I told him was how much I loved Life of Pi and how much I admired his vfx work on the tiger Richard Parker. I remember telling him that our animal protagonist Okja should consist of similar realism. I told him she should not be akin to dragons and monsters in fantasy films. Although she’s not a real existing animal like Richard Parker, she should be depicted with the same excruciating realism. And we would base her on actual animals. We shared many photos of hippos, elephants, and manatees. By the time I first met Erik De Boer, the creature design for Okja was nearly complete so I was also able to share many conceptual artworks. For our second meeting, I brought a Okja maquette created by our Korean creature designer Hee-Chul Chang, and we used it for our discussion.

Did you utilize previs on Okja? How important is previs to you in realizing vfx-heavy, or any other, scenes, and how did you use it on set?

Bong Joon-ho: The two most important vfx scenes for which we used animatics were the opening cliff scene, where Okja saves Mija’s life, and the tunnel scene, where Mija reunites with Okja. I’m usually pretty faithful to my storyboards and previsualizations, so our vfx and camera crew also relied on them throughout the shoot.

During filming of Okja, how important was it for there to be something on set in place of the character, or was this not especially important? What kinds of things would you tell the crew and actor to help them imagine a real creature there?

Bong Joon-ho: On the set, we had a foam puppet, approximately the size of the would-be Okja, called a ‘stuffy.’ The stuffy was especially important for Seo-hyun, the actress who played Mija, because she had many scenes in which she touched Okja’s face and otherwise physically interacted with the creature. We had separate stuffies for different body parts, such as the head, bottom, and mid-section, and the actors would push and physically interact with them. During pre-production, we held stuffy rehearsals with Seo-hyun and other actors who had scenes with Okja. It helped the actors visualize Okja as an actual living being.

Can you talk about what your schedule was like during post-production – how did you interact with Erik De Boer and the visual effects team?

Bong Joon-ho: I visited Method Studios in Vancouver two times, but aside from that, I remained in Seoul throughout post-production because we had our editing and sound facilities here. Naturally I had many Skype meetings with the vfx crew. Several times a week. For example we would have a Skype meeting at 9am Korea and 5pm Vancouver. Erik and [animation supervisor] Stephen Clee would be on the other end along with the sequence supervisor or other vfx artists, and on our end, we would have the vfx AD, post supervisor, and myself.

Almost everyday we would do a shot-by-shot vfx review and share feedback, ideas. We did that for more than six months. Thanks to the availability of cineSync, we didn’t really feel any constraints of being in different countries, but I guess the biggest obstacle, if you could call it that, was the time difference. As long as we could figure out a time to Skype, there wasn’t much difficulty.

What was one of the most challenging visual effects sequences in Okja to pull off, either in the planning stage, during shooting, or in post?

Bong Joon-ho: The cliff sequence, which I mentioned earlier, was the most difficult and challenging sequence in the film. First of all, it was a difficult location, and the logistics were challenging – what kind of equipment to use, etc. And since our lead was a minor, we had to be extra thorough with the safety aspects (one of the scenes involved the actress hanging from a cliff). So we divided the shots into three categories – shots in which we see the actress’ face, shots that show the stunt double, and shots that use a digital double – so we knew exactly what we would shoot at the actual location.

The location itself was a combination of Korean and Vancouver locations because the shooting schedule didn’t allow shooting the entire sequence in one location. Much of the cliff you see is actually vfx, and nearly everything except for Mija in that sequence is vfx. We finished that sequence just a few days before submitting the DCP to Cannes. It was an arduous sequence which we worked on right until the very end, and I’m happy that it came out well.