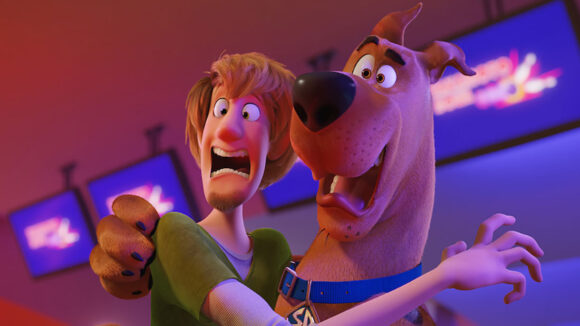 In the second episode of Cartoon Brew’s new podcast, we speak to Tony Cervone and Bill Haller, director and animation supervisor on Warner Bros.’s Scoob!, which was released on video-on-demand platforms on Friday.

The film is the first fully cg-animated installment in the Scooby-Doo franchise. In the podcast, Cervone and Haller explain how they met the challenge of porting the iconic Hanna-Barbera graphic style into an authentic cg universe.

It helped that they both had experience with the franchise. Cervone, a Warner Bros. veteran, has worked on a wide range of projects featuring new iterations of H-B and Looney Tunes characters; he was also the co-director of animation on Space Jam. Haller was a supervising animator on 2004’s Scooby-Doo 2: Monsters Unleashed, and his other credits include Hotel Transylvania and The Book of Life.

Even so, the pair were taken aback by the sheer difficulty of recreating the characters in 3d — not least the Great Dane himself, who goes “immediately off-model, no matter what you do.” As they tell it, their efforts to stay faithful to half a century of Scooby-Doo shows informed everything from the rigging to the camera choices.

Scoob! is packed with references to franchise lore and animation history in general. Fittingly, Cervone and Haller dive deep into their inspirations — from Shere Khan to Ray Harryhausen — as they describe their “very 2d approach” to the film.

Tune in to find out which show influenced them even more than Scooby-Doo, why the film’s viral Tiktok marketing campaign posed a specific challenge, what the future holds for the “Hanna-Barbera Cinematic Universe,” which Scooby-Doo film “changed everything,” and what Cervone thinks is “the secret of animation.”