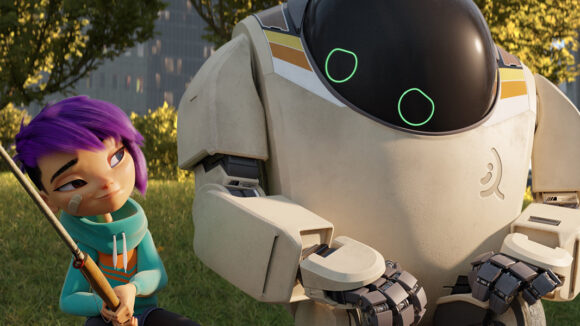 The latest animated feature worth catching isn’t screening in a movie theater — it’s on the streaming service, Netflix. The action-packed sci-fi film Next Gen premiered on Netflix September 7 and can be viewed here.

Next Gen follows rebellious young girl named Mai who meets a high-tech combat robot called 7723 in the futuristic city of Grainland. The story of this unlikely friendship is a conglomeration of ideas for a futuristic feature from writer/directors Kevin R. Adams and Joe Ksander, and from ideas generated at popular ‘rage comics’ Chinese multimedia company Baozou.

Cartoon Brew takes a look at how those elements were combined to make Next Gen – a Canada/China co-production – and build a unique animated world.

Adams and Ksander met while working on Shane Acker’s 9 (released in 2009), where Ksander was animation director and Adams was art director and cinematographer. “We found we had a similar taste and style, and approached writing and story in much the same way,” says Ksander. The pair would later craft a live-action short film called Gear in 2014 that happened to also be about a rebellious young girl and a robot.

It was around the same time that Baozou, a well-known Chinese name in online comics, web, and television shows, was looking to expand to films. One of the company’s series features Wang Nima, an actor hidden behind a ‘radish’ head mask (this inspires a similar character in Next Gen).

Nima’s series had presented an online comic with a robot called 7723 with a unique feature: it is so severely damaged that, to ‘stay alive’, must decide which of its memories to erase and which to keep. That became a key part of the story in Next Gen. “It was a great seed of an idea, of somebody who had to choose what to remember and what to forget,” says Ksander.

After the story was initially developed by Baozou producer Olivia Hao as a film idea, Adams and Ksander were eventually brought on to write a version of the script. They were tasked with expanding the early ideas with ones of their own. Says Adams: “There was a bigger appetite for different types of stories than could possibly fit in one film. We were trying to incorporate all of those things together, and then Olivia simply asked us, ‘What would you do if you got to do your own thing?’”

As the story process progressed, many elements were added. This included incorporating an evil CEO of a tech company that sells robots to millions of homes, and giving some background to the main character Mai’s anger and her initial loathing for robots. “We wanted who she was to be really specific, not just an ‘angry teenager,’ with nothing behind it,” notes Ksander. “She and her mother have experienced the same tragedy, regarding Mai’s father. It’s safe to say, we just know her dad’s not in the picture, and has left Mai with some darkness and some damage inside her. And that’s a challenging character in an animated film.”

“She has a particular type of pain,” adds Adams. “She’s angry and she misses [her father]. She’s not just angry and glad he’s gone – she’s angry and wants him back. And that’s a complex place to be.”

The filmmakers hired a diverse voice cast to add nuance to the characters. Voicing Mai is Charlyne Yi, with her mother, Molly, played by Constance Wu, who recently starred in Crazy Rich Asians. It was important for the filmmakers to hire Asian-American actors to voice these roles. “Since Mai was an Asian-American – or Asian-Grainlandian, I should say – character,” says Ksander, “we wanted to make sure we didn’t whitewash the role. We gave opportunities to Asian- American actors.” Meanwhile, John Krasinski, star of The Office and director of A Quiet Place, voices 7723; Jason Sudeikis plays the evil tech creator Justin; David Cross takes on the chief scientist Dr. Rice; and Michael Pena has a star turn as Mai’s dog, Momo, probably the best swearing dog you’ve ever heard.

The directors continued to build the world of Next Gen with more complex story elements, too, including the fact that the robot 7723 or ‘7’ – would develop a close bond to Mai, and struggle to delete his memories of her in order to remain functional.

The complex emotional relationship is at the heart of Next Gen, while at the same time the film has hearty helpings of high action, drama and humor (look out, in particular, for the toothbrush scene). Ultimately, it’s the relationship between robot and girl that matters. Mai even says, as their bond grows, ‘Look at us, a broken robot and a broken little girl.’

“We’re all broken,” says Ksander, examining this point. “The robot is literally broken – he can’t save his memories. And even though that’s a fantasy, science fiction conceit, it’s like a metaphor for what we all go through at various times in our lives. As they become friends, at one point, 7 advances further than Mai does, and becomes more emotionally aware than she is. He understands her pain before she even does. He’s the perfect person for her – and she’s a perfect person for him, as well.”

Watch Next Gen exclusively on Netflix.