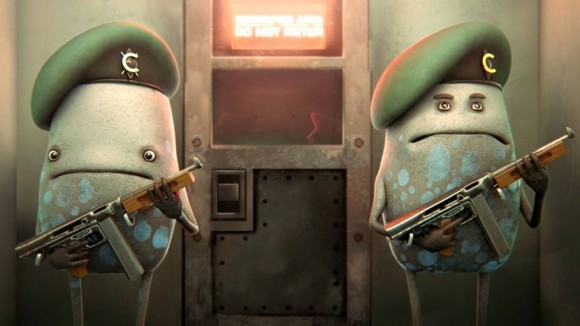 Their world is in the grip of a lethal outbreak. A mysterious blue substance is leading to catastrophic destruction. Who is behind it all?

Channel 4 today announces 4Creative’s campaign to promote this year’s ‘killer night of fundraising’ Stand Up To Cancer, the partnership between Channel 4 and Cancer Research UK. The film launches on-air this Friday, September 5. Channel 4 will premiere the film to TV viewers during The Last Leg on Friday night, before rolling out into cinemas nationwide. It will also be broadcast across more than a hundred commercial channels on Sunday night including the ITV, UKTV and Sky network of channels.

Nexus directors Smith & Foulkes said: “The initial brief was to turn the table on Cancer, depicting the disease as a civilisation spreading aggressively – unable to prevent its own Armageddon in the style of a disaster movie. The main challenge was how to visualise the Cancer cells. We wanted to steer away from the obvious route of showing cells as a bunch of grotesque alien germs, but we were also acutely aware of not making them too human or cute. We also had to find a way to illustrate the new therapies, drugs and scientific breakthroughs that are fighting Cancer. We wanted their arrival to be initially magical and mysterious, so we used a glowing blue orb, an unexplained light descending upon a shadowy world.

“Disaster movies rely heavily on vast visual spectacle and a cast of thousands, so working within our time constraints we decided to recreate this using 2d matte paintings to show a sense of the city without having to model every building. This gave it an illustrative and richly textured feel. Modelling and animating our cast in 3d gave us the flexibility of performance we wanted, and made them stand out from their environment.”