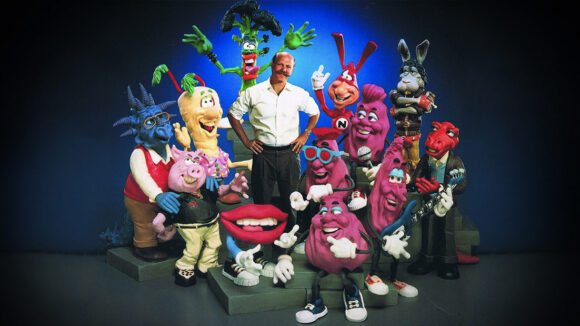 Will Vinton, a seminal figure in the development of commercial stop motion animation in the United States, died this morning at the age of 70. The cause of death was multiple myeloma, a cancer of plasma cells, which he had battled for over a decade.

Vinton started making clay animation films in the 1970s, and won the Academy Award for his 1974 film Closed Mondays, that he co-directed with Bob Gardiner. He established Will Vinton Productions (later Will Vinton Studios) in Portland, Oregon in the late 1970s, and coined and trademarked the term “Claymation.” The studio employed and trained hundreds of stop motion artists throughout the 1980s and ’90s.

The studio’s work used to be a ubiquitous presence on American television, commercials, and music videos, with some of the studio’s iconic advertising characters including the California Raisins, the Domino’s Pizza Noid, and the M&M’s. His studio produced projects as varied as the feature film The Adventures of Mark Twain (1985), tv specials such as A Claymation Christmas Celebration and A Claymation Easter, tv series like The PJs (1999) and Gary & Mike (2001), and Michael Jackson’s “Speed Demon” music video (1988).

In the early-2000’s, Nike co-founder Phil Knight became an investor in Vinton’s studio, and within a few years, Knight ousted Vinton and placed his son Travis in charge of the operation. The studio reformed as Laika, the four-time Oscar-nominated studio responsible for films like Coraline and Kubo and the Two Strings.

After having his company taken away from him, Vinton worked on a variety of projects – he executive produced the cg animated feature The Wild, created the Dark Horse graphic novel Jack Hightower, wrote the musical The Kiss, and developed animation projects through his company Freewill Entertainment.

Despite the acrimonious end of his first company, Vinton had made peace with the situation. Asked by the Portland Tribune earlier this year what he thought of Laika, he told them, “People ask me and I tell them I’m delighted that Laika, which has deep pockets, can take on these projects and move them and pay people well and keep the animation industry going. It’s never easy to run a creative business. We always had to be profitable, which was a huge challenge. I envy the situation that Travis Knight is under.”

A feature length documentary, Welcome to my Daydream, directed by Marq Evans, is currently in production.

Here is the full statement from his children about his passing:

This morning our father, Will Vinton, passed away surrounded by love from his family. Will had endured a 12 year battle with Multiple Myeloma, although you never would have known of this fight. For the vast majority of that time he continued forward in his life with strength, positivity, and humor, enjoying tropical get-aways, shepherding new creative ventures, and caring for his two sons, daughter and wife. Will was the strongest man we have ever known, both in his work ethic and his mental resolve. He always said, “Do good work and everything else will follow,” and he never gave up on the things that were important to him. He saw the world as an imaginative playground full of fantasy, joy, and character. He instilled in us the greatest values of creativity, strength, and pride in ones own work. He created stories and characters filled with laughter, music, and powerful lessons that are globally beloved. He brightened any room with his signature mustache, and he continued to make jokes and laugh until the very end. His work will live on in animation history and will continue to inspire creative thinkers and makers.

We grieve heavily as our dad leaves a hole in our lives that will be impossible to fill. His wishes were for us to continue the projects he had started; we will try our best to do so. We will honor him in our own work and strive to always embody his lessons. We ask that his passing be a celebration of his life and work. He wouldn’t want us to be sad or discouraged, but rather to celebrate the wonder and beauty of life in his name. We ask for support and understanding for our family during this time.

Former studio artists are sharing their condolences on social media. Hal Hickel, who worked at Vinton’s before going on to become animation supervisor on Rogue One: A Star Wars Story and Pacific Rim, and animation director on Rango, wrote on Twitter:

I am profoundly, and deeply saddened to learn of the passing of Will Vinton. I spent 6-1/2 very formative years working at his studio. As my friend Chuck Duke said to me: “He’s in our DNA”.