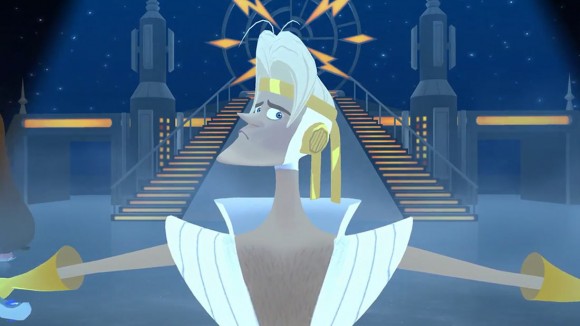 Google has unveiled the trailer for On Ice, the latest short in its interactive Spotlight Stories series.

On Ice takes places at a fanciful ice show and revolves around a battle for the spotlight between its star performer and an uninvited guest. The short was directed by industry veteran Shannon Tindle, who also came up with the idea for Laika’s upcoming Kubo and the Two Strings and was the film’s original director before being replaced by Laika CEO Travis Knight.

On Ice, which was nominated for an Annie Award this year in the short category, is produced by San Francisco-based Evil Eye Pictures and developed by Google’s Advanced Technologies and Projects group (ATAP). Google, which first teased the short at Comic-Con last summer, will soon release the project for iOS and Android devices.

Four other shorts have been released in the Spotlight Stories series: Windy Day by Jan Pinkava, Buggy Night by Mark Oftedal, Duet by Glen Keane, and Special Delivery by Tim Ruffle at Aardman.

Beginning with the Aardman short, Google made the films available on YouTube 360, which works on desktops as well, but the Spotlight Stories experience is specifically designed for mobile and VR platforms. The shorts give viewers greater control over the experience, allowing the user to move their mobile device to follow individual characters, look anywhere in a scene, and unlock mini-stories within the story.