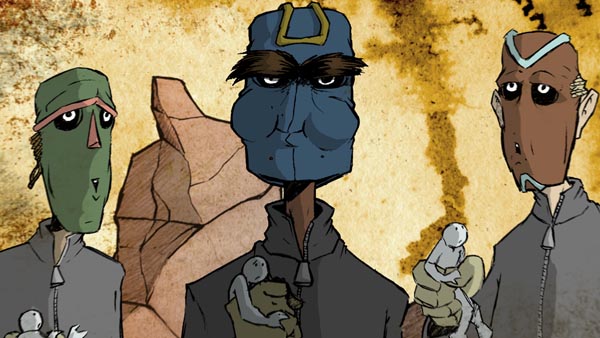 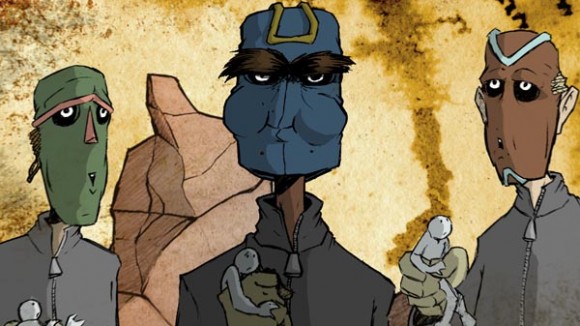 Patrick Smith has debuted his 2011 short Masks on the Internet. He called upon frequent collaborator, musician Karl von Kries, to work on the film’s music, but unlike their earlier collaborations, they inverted the workflow. On earlier films like Delivery and Drink, Smith created the animation before von Kries scored the film. With Masks, von Kries composed a score first, and Smith then drew what he heard.

Having known Pat for the past decade, I believe I can say with some degree of confidence that his great love is the plasticity of animated movement. The raison d’être of his films is a passion for creating animation via the currently unfashionable ritual of flipping thousands of crinkly pieces of paper over a lightbox. And yes, Masks was animated on paper, not digitally. I’ve never asked him if he enjoys filling out timing charts and exposure sheets too, but I suspect he gets some perverse pleasure out of the entire process. He’s also one of those rare indies who knows and loves the Disney greats, past and present. He admires the hell out of Bill Tytla, Glen Keane and Sergio Pablos, and he funnels that passion for dynamic, powerful character animation into an independently minded storytelling approach.

In earlier films, Pat used basic visual analogies to express bigger themes: in Handshake, an entangled man and woman depict individual identities literally consumed by a relationship, while in Puppet, hand puppets with a life of their own become the vehicle by which the creative process overtakes its creator.

Masks is less conceptual and builds a more complex narrative, but the opportunity for masochistic character animation exercises still presents itself through the mysterious masked characters who chase, chomp and destroy multitudes of tiny, helpless figures. Relevant contemporary themes weave throughout the narrative, including humanity’s overuse and abuse of natural resources and the power of the masses to rise against the exploitative classes. If not necessarily his most entertaining film, Masks qualifies as Pat’s most ambitious and effective work as a filmmaker to date.