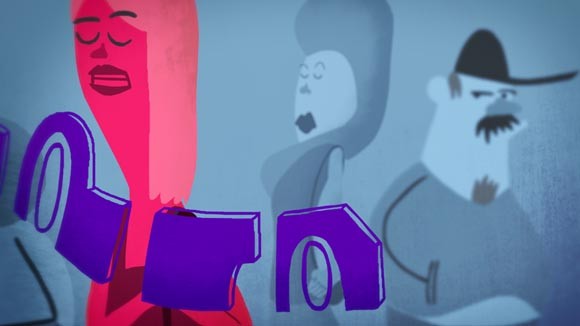 The Cartoon Brew Student Animation Festival is made possible by sponsor JibJab and their strong support for emerging filmmakers.

Slap on a pair of headphones before you watch Louis Morton’s Passer Passer, a graduation film produced at the Univeristy of Southern California. The film uses the atmospheric sounds of urban settings—recorded in both Los Angeles and Tokyo—to create a dense and exciting soundscape that evokes the organized cacophony of city life. From the smallest sounds, like the tinkle of a fork in a restaurant, to the brashest car alarms, everything is mixed into one well-simmered city stew.

Morton matches the audio with a fresh visual style that mixes the abstract and the cartoon. His loose, fleshy animation loops and vivid sense of color add the right quality of whimsy. There is a clear visual journey, from day to night, and we are whisked from scene to scene at the relentless pace of city life. The camera moves diagonally across the space in a way that further enhances the stresses of city living. By the end of the film, we’re ready to go home and get a good night’s rest, before it starts all over again the next morning.

Continue reading for comments from the filmmaker Louis Morton: One initial spark came from a podcast, in which a musician explained how he categorized several escalators in his city by sound. It got me thinking about the huge array of sounds that I encounter every day in Los Angeles and if I could develop a way to categorize the most common sounds through animation. Oftentimes I’m about to fall asleep and a car alarm goes off, and I imagine a little guy spazzing out to the rhythm of the alarm, and it makes it less annoying. I wanted to take all these city sounds like the alarm, give them personalities and organize them into a system. My plan was to walk around recording audio for a few months and then listen and animate what I heard.

All audio was recorded on a handheld Zoom H2 that was usually in my pocket to avoid looking like a nosy creep. I did a rough sound edit in Adobe Audition before handing it off to the super-talented Katie Gately, who used Ableton Live for the sound design and mix. I animated everything in Flash on a Cintiq. Most of the cleanup and shading was done in Photoshop. Compositing was done in After Effects.

The animation was mostly driven by the audio, so it was difficult to know if a scene was working until I had watched it with sound. Katie and I developed an interesting work method. I would give her small sections of the audio, and she would alter it in such an interesting way that it would often give me new ideas for the animation. Especially in the second half of the film, the animation developed organically with her sound design work. It was definitely a collaborative process, which was very rewarding, but more challenging than a traditional approach would have been. Technique-wise, I wanted to experiment with how many frames it would take to make an action or character readable, and as a result I think I learned a lot about the craft of 2D animation.

Living in L.A. and (briefly) in Tokyo and soaking in the sounds of each city. In Tokyo: zoning out in a train station. In Los Angeles: merging with highway traffic and walking down Hollywood Boulevard at night. The blogs 99% Invisible (the escalator episode), Radiolab, and Adventures in Audio helped me form the initial ideas for the film. I was also influenced by the “city symphony” films of the 1920s and the work of Norman McLaren, especially Spook Sport. Also inspiring were: Jules Engels’s background designs for UPA, the Disney “Silly Symphonies,” the awesome work of my classmates and the support of the faculty at USC.

WHERE YOU SEE YOURSELF IN FIVE YEARS

I hope to be in a position at a studio where I can be designing, animating or directing short-format work, commercials and ideally title sequences or educational type work. I love working in the super-short format, and I like using animation to explain things. And no matter what, I plan to continue making short films!