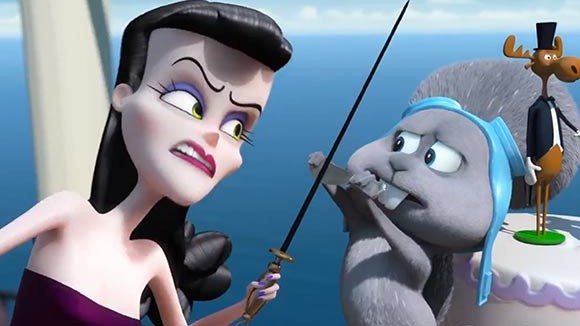 Another Fine Moose You’ve Gotten Me Into, or The Man In The Iron Moose!, the Rocky and Bullwinkle short that Gary Trousdale (Beauty and the Beast, The Hunchback of Notre Dame) directed last year at DreamWorks, will be included on the upcoming release of the Mr. Peabody & Sherman Blu-ray. The lengthy two-minute clip below was published a few days ago by Entertainment Weekly.

I’d like to label this Exhibit A in the case against CG excess. There’s a ridiculous amount of crap in the backgrounds: randomly placed objects that don’t frame the action and vigorously jerking background characters that make the actions of the main characters nearly impossible to read. But the real question is, WHY? Why spend money adding all this stuff when it adds zero to the entertainment value of the film. Not only could studios save a ton of money by designing their productions more intelligently and efficiently, but they’d also be making better films.

There’s so much that’s just plain off about this clip. Tonally, it doesn’t come close to capturing the spirit of Jay Ward’s characters, but even disregarding the legacy of the characters, it doesn’t amount to anything on its own. The cliche expressions of the leads are stiff and inorganic, and the action is mistimed for comedic impact. I don’t know any of the behind-the-scenes about the production, but the whole thing feels like some hare-brained training exercise for one of DreamWorks’ foreign studios. After watching the clip, which is almost half of the film’s 5-minute running time, it’s certainly understandable why DreamWorks has been reluctant to release the short.