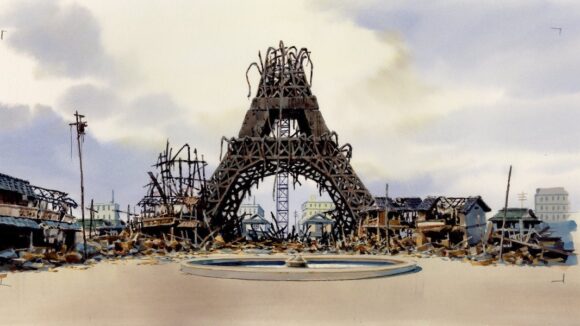 Fans of STUDIO4°C, the long-running studio behind anime classics like Mind Game, Tekkonkinkreet, and Children of the Sea, are in for a treat. The studio has teamed up with L.A.’s Gallery Nucleus and Japan’s ACALI to launch an exhibition of original animation drawings, layouts, background paintings, and cels.

Originally slated for late 2020, the exhibition has become a retrospective of sorts, celebrating the studio’s 35-year anniversary. It will take place at Nucleus from February 6 to 21. Since its inception, STUDIO4°C has produced numerous feature films, and is probably best known around the world for Memories (1995), Spriggan (1998), Princess Arete (2001), The Animatrix (2003), and Mind Game (2004). Its 2006 film Tekkonkinkreet earned six honors, including Best Animated Film at Fantasia in 2007, a special mention for the Lancia Platinum Grand Prize at the Future Film Festival in 2008, and the Japan Academy Prize for Animation of the Year.

Although Koji Morimoto art-directed several of the studio’s projects in the beginning, STUDIO4°C has since explored more experimental avenues. Starting with Spriggan, the look and feel of each subsequent film has been drastically different: Princess Arete, Mind Game, and Tekkonkinkreet were all very stylistically distinct.

The studio has completed nearly 15 feature films since 1995, plus countless short films, OVAs, and music videos. Its works continue to be acclaimed around the world, and it has many more projects on the horizon.

In November 2018, Gallery Nucleus hosted an exhibition with distributor GKIDS which centered on the works of Mamoru Hosoda. In anticipation of the release of Children of the Sea, GKIDS introduced Nucleus to representatives of STUDIO4°C, and thus began discussions of a possible exhibition in celebration of the film’s release. As the lockdown became more severe and theaters began to close, the focus of the event shifted to a retrospective of sorts, which would showcase work from STUDIO4°C’s vast library as well as Children of the Sea.

Below, Nucleus curator Ben Zhu talks about the exhibition and its origins.

Cartoon Brew: How did the pandemic affect your plans?

Zhu: 2020 was a challenging time for our gallery for sure, but I felt we adjusted pretty quickly to focusing more online and doing the virtual thing. We applied for the PPP [Paycheck Protection Program loan], and it certainly helped, but it was mostly the support of our community that fueled us and allowed our gallery and shop to survive.

We had begun talks of the show just as the pandemic hit. We’d already pushed the exhibition once from August 2020, and felt that February 2021 would be far enough out that Covid would hopefully have improved. In hindsight we were probably being overly optimistic.

But we have been huge fans of STUDIO4°C and their filmography for years, and we’re super excited and honored at the prospect of exhibiting their original art. Although conditions with Covid have not gotten much better in the U.S., we are forging forward with the exhibition, hoping that people around the world will enjoy the work on our site. But we still urge people to come to view these works safely in person.

How is Nucleus handling in-person viewings?

Other than the three-month lockdown at the start of the pandemic, we have been open to the public since June 2020. We have been enforcing strict Covid protocols, such as mask wearing and hand sanitization upon entry and exit.

For the STUDIO4°C exhibition, there is technically an opening reception on February 6 that guests can RSVP for (you can do so here). But people can just come in any day after the 6th without an appointment during our regular hours: 12–8 p.m. daily, closed on Mondays. Entry is free.

We are only allowing 15 people in the gallery at a time for opening night by having RSVPs in hourly blocks. This has worked really well for us, and although it means our opening nights are pretty much capped to around 100–150, we have had at least six successful openings with no problems. Everyone is super polite and respectful and just eager to get out of the house.

Tell us a bit about what the exhibition will feature and other highlights.

Many of these drawings have been in storage for years. Among the works in storage were old cels and envelopes of animation scenes. Although many backgrounds are digital, most animation done in Japan is still hand-drawn on paper.

In lieu of our usual in-person meet and greet, we still wanted to give fans a special treat, so we’ll be doing a live Zoom session with Ayumu Watanabe (director of Children of the Sea) and possibly other guests from the Japanese anime industry. They will be speaking to us live with a translator on Sunday, February 7, at 6 p.m. PST. Admission costs $5 and a ticket can be bought here.

Each of them has been in the animation industry for well over 30 years, so we are eagerly looking forward to hearing their wisdom and insight into the Japanese animation industry. They will be talking about Children of the Sea, and we have many questions about their previous films and the evolution of the studio.

We were also able to import limited copies of the Children of the Sea and Mutafukaz art books signed by their respective directors or art directors.

Overall, we are both really excited and anxious, hoping that fans don’t miss out on this rare opportunity to own a piece of history from this prolific 35-year-old studio, and get the chance to tune in to the live-streamed panel.

With question marks hanging over the next editions of San Diego Comic-Con and Anime Expo, this art exhibition and panel will give anime fans and collectors a reason to be cheerful as we enter the new year. Learn more about the event on Nucleus’s website, and about STUDIO4°C here.