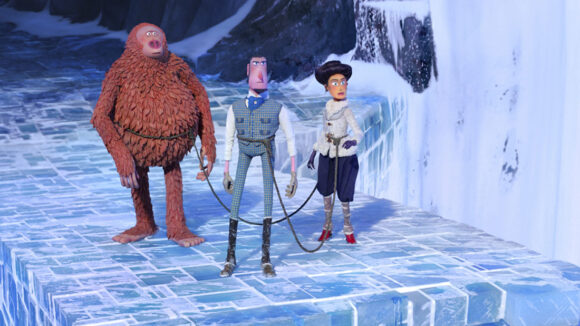 “It was fortunate that we went from Kubo and the Two Strings, at the time the biggest scale we had ever pulled off at Laika, to Missing Link because we learned a few things on that film that we expanded upon this time around,” says Missing Link art director Rob DeSue.

But even with the experience accrued on all of their past four Oscar-nominated films, nothing could prepare the Laika landscape, puppet fabrication and vfx teams for the challenge that awaited them with the movie’s climactic scenes in the icy tundra of the Himalayas. In the film’s penultimate sequences, adventurers Sir Lionel Frost (Hugh Jackman) and Adelina Fortnight (Zoe Saldana) have accompanied sasquatch Mr. Link (Zach Galifianakis) to the Himalayas on a quest to reunite him with his Yeti cousins.

In prior films, Laika had innovated the idea of creating environmental models, or maquettes. As Laika’s Visual Effects Society-award-winning vfx supervisor Steve Emerson relates, “Environmental maquettes are useful not just for the art department to attach a broader landscape to the specific place that you are building, but these models can be scanned and imported into pre-vis, and then cameras can be dropped in, different lenses can be tried. It helps so much to work out the challenges of balancing the scale of an object or puppet with the scale of the landscape. And when done correctly, it can be the foundation for a visual effects build. We did these location maquettes all the way back to Coraline. We did maquettes for the ground around her house, the house itself and the garden. But this technique really became indispensable to us when we had to build something as daunting as a piece of the Himalayas in 1/2000th scale. That was a giant step for our art department because it allows us to keep our style while we build out so much bigger.”

Of course, the biggest component of any set in the Himalayas is ice and lots of it. Missing Link landscape artist Hannah Baker admits writer/director Chris Butler’s vision for a showdown in the icy cliffs of the largest mountain range on earth had her worried.

“Ice is one of the most difficult materials we’ve ever had to create,” says Baker. “It has such a depth to it that we didn’t know how we were going to achieve it. Making different layers of plastic and acetate and urethane, we built out the depth of the material. By collaborating with one another, by developing new techniques together…that leads to the innovation in our department.”

Vfx supervisor Emerson adds, “On Kubo all the action was set in mythical Japan. You are moving from environment to environment, but it’s still very much unified by that Japanese aesthetic. In Missing Link, we went from Loch Ness to London, to the Pacific Northwest and the Southwest of America, crossing the country to New York…across the Atlantic Ocean to end up on the Coast of France. Then it’s on to a train to end up in India before arriving at the base of the Himalayas and that’s before we even get to Shangri-La. It was, by far, our biggest vfx challenge on this film.”

Size was a particular challenge. For instance, the Himalayas required very large sets. “The Himalayas are something like 20,000 feet tall,” says Annie Award-winning production designer Nelson Lowry. “And the Sir Lionel puppet is about a foot tall. If we were to keep to our scale in a stop-motion animated film, with Sir Lionel being about a foot tall, that would make the mountain range about 1,500 feet tall. We were building such giant representations of nature. We wondered how do we insert our tiny puppets into such vastness and have them be discernible in the scene? Many spirited discussions among the production design team, the director and the director of photography ensued. Eventually we found the right scale so that our characters could be seen clearly, especially in the climactic scene of the movie which takes place on a perilous ice bridge in the mountains. In order for them not to be perceived as specks of dust, we had to modulate and change the scale of things to make something more stylized, not quite real, but ultimately more convincing in telling the story.”

Another issue had to be solved in the Puppet Fabrication department. “Our main character is a Sasquatch and he’s covered with fur. And he ends up in a snowy, windy tundra,” says puppet fabrication supervisor John Craney. “Our director Chris Butler wanted Mr. Link’s fur to react to the environment, of course. He wanted it to animate. He wanted it to move. Stop-motion is an incredibly detailed laborious process and now we’re asking the animator to move each piece of fur…and Link’s costume had a zillion pieces of individual fur. With that kind of detail, we’d never get the movie done.”

“The Puppet Fabrication team had multiple discussions about how to deal with the fur movement in windy environments and came up with the idea of invisible UV paint,” Craney recalls. “It’s the type of material that CSI teams use when investigating a crime scene, looking for fingerprints and other residue. A piece of Link’s fur would be painted with the UV paint, not too much at the base and more at the tip. When that piece of fur is blasted with UV light, you end up with a really bright area at the tip. Then, when vfx receives the animation plate from the stages, it reads as somewhat gray at the base and white at the tip of the fur section. The computer then drives distortion based on luminance values. Because there is more white at the tip, it moves more, and because there is less white at the base, it moves less, just as real fur would do in the wind. The end result is fur that is wiggling around in the wind. That is shown to the director and the animation supervisor, Brad Schiff and another challenging production problem is solved. Laika’s capability of augmenting a stop-motion performance with a digital solution is unique in the animation space.”

As landscape artist Hannah Baker remembers, “Seeing that sequence all come together was so amazing – especially surrounded by all the people who had worked on it. It was bigger and better than we could have ever imagined.”