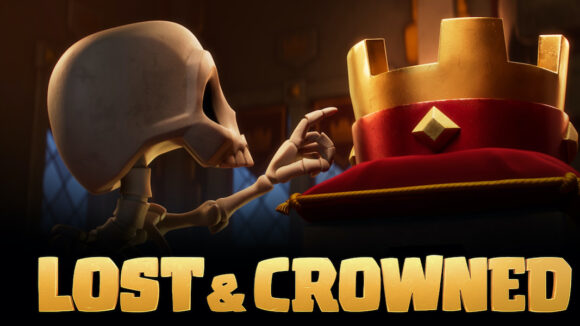 If Lost & Crowned looks familiar and yet new at the same time, that’s because it is. Born from the beloved universe of the popular mobile-game Clash franchise (developed and published by Supercell), the Lost & Crowned storyline takes place in the Clash landscape, after the lights have gone out, the battle is over, and everyone has gone home from work. That’s where the familiarity ends.

Lost & Crowned characters Peter and Larry, however, are new — as is the short-film format the story is designed for. Well, new for Psyop, the studio responsible for bringing director Borja Peña Gorostegui’s story to light. Yet they’ve created a film that has charmed audiences and qualified for Oscar consideration.

“Psyop works at the intersection of art and commerce every day with a small but mighty team of filmmakers, animation artists, and technologists,” says Amanda Miller, the producer and executive producer. “These visual storytellers aren’t limited by form, so adding the short-film format to our studio was only a matter of time. Borja’s artistic voice, visual eye, and storytelling techniques are tailor-made for film — and Lost & Crowned is just the first gem we’ve brought to audiences.

In looking for inspiration, Borja drew from his favorite film maker, Steven Spielberg, and other beloved films from his childhood. Leaning into the tender emotional moments of E.T. while drawing on the adventure and humor of Indiana Jones and The Goonies, Lost & Crowned is an epic adventure feature condensed into 11 minutes.

“One of the challenges with the story was how to make two very similar characters distinct, relatable, and not look like total jerks,” says Peña. “It was a balance to make sure that Peter, the older brother, wasn’t too gruff and that Larry, the younger one, wasn’t just an out-of-control brat.

“There were a lot of redraws in the boarding phase and early design explorations which stress-tested their relationship, especially because we knew that we couldn’t wait and try to fix it in animation. It needed to be solved at the beginning.”

The team knew they needed to make sure that the character arcs and development were clear from the beginning of the project. But they faced a conundrum: how do you make your heroes show a range of nuanced emotion when they don’t have eyes and don’t talk?

“Even though Peter and Larry don’t have eyes or voices, we had to find a way to tell an emotional story without making it super over-the-top or cartoony,” says JD Fievet, the animation director. “We used very little squash and stretch, and we worked hard to make sure their physicality looked like that of real little boys.

“But counter to that can be the instinct to always add more nuance and more performance. That often can be more detracting from the story than a simpler, more pure approach to the character animation. There were a lot of conversations about what the line was between the right amount and too much animation. If you are looking at what the fingertips are doing, you are missing the main part of the performance, which means that the shot overall isn’t working.”

Lost & Crowned may ultimately be an intimate story about a relationship between two young brothers and the bond of their love, but it unfolds as an exaggerated journey through a highly detailed environment. The level of detail and care in the film’s lush animation, effects, and rendering raised the bar for the team.

“Every prop in this film tells a story,” says Liam Griffin, the cg supervisor. “The incredible level of thought and detail that went into the assets blows your mind. Every detail in every environment was designed with world building in mind, and when you watch the film and take in how many props and art pieces and objects are in there you realize what a massive undertaking it was.

“I think we ended up with over 400 cg assets. One of the best production decisions that we made was to have the cg department working hand in hand with the design team early on, so that we weren’t getting set designs that wouldn’t work effectively in 3d space. We built a full blockout of the castle that we would adjust as the story developed, so we were confident that when the brothers journeyed through it, the continuity of the path made sense.”

When considering how to design the world, Psyop reached out to their global network of designers and artists. “We make a considerable effort to find partners that we like to work with, regardless of their time zone,” says Nick Read, the film’s producer. “That way we get a diverse pool of opinions and ways of working that add a lot of texture and depth to our projects. We had artists in Russia, Sweden, China, and all over the States in addition to the core team in L.A. and New York.”

The lighting and look development of the world was also designed from the ground up. The setting begins in golden-hour light that transforms into deep nightfall and then back to dawn through a total of 21 unique sets. Each of those environments and lighting setups needed to feel distinct but within the same world.

“While the design team was working on the physical build,” says Issac Irvin, the lighting supervisor, “we also had a color and look dev team working so we could figure out how to make a natural-feeling lighting setup work. There are no electric lights in this world, so if light isn’t coming from the sun or the moon, it’s coming from fire, explosions, magic, or candles.

“There is a lot of detail in the film that we didn’t want to miss, so there was a lot of r&d that we did to dial that in. Plus, we were using a lot of the classic Spielberg films as reference, so the bar was set super high.”

Ryan Raith, the compositing supervisor, adds: “We also brought in director of photography John Zilles to help us identify what a real film back-and-lens package would look like on a live-action set. That gave us concrete information about depth of field, exposure levels, and color balancing.

“We also decided that we would treat our Maya camera package like a practical camera package. We restricted ourselves to a limited number of lenses and didn’t ask the camera to do anything that you couldn’t do in real life. We did some specific tests to see what a single candle flame looked like through the lens package, which was really informative. That restraint gave the film a more sophisticated, cinematic feel. It was great to be able to add John to the team as another way to expand our toolkit and way of looking at projects.”

“Lost & Crowned has been a labor of love for the whole team at Psyop,” says Miller. “We feel fortunate to be able to work on such ambitious projects, and we’re also really excited about the other films that we are going to be able to share with the world.”

The studio’s first animated adult series Devil May Care will premiere on SyFy on February 6, and its next short film that will premiere in festivals is Tom CJ Brown’s Christopher at Sea. “Psyop is a studio that prides itself on championing creative visions,” concludes Miller, “and Lost & Crowned is part of that.”

Learn more about Lost & Crowned on its website and watch the film in its entirety below: