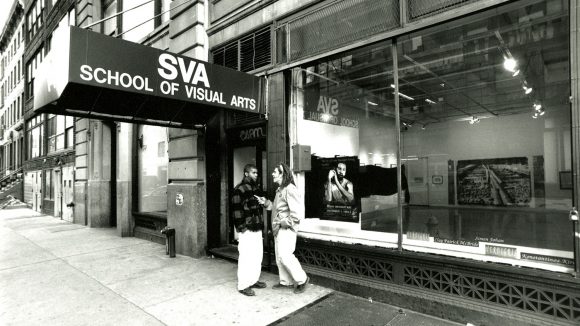 When we first started, most of the software and technology we use today had not been invented. Our lab consisted of state-of-the art PCs, software, and analog video equipment of the time. The internet at that time was primarily text-based, but we believed it would revolutionize how we communicate and create art. When we installed our first ISDN line to access the internet, Con Edison had to dig up 21st Street to install the cable to our building.

I have seen many technological changes, but one thing that has remained the same is our multidisciplinary approach to digital art making. We were the first MFA program in the United States to encourage creative self-expression using computers and emerging technology.

Early faculty members were pioneers of digital art such as Chis Wedge and Michael Ferraro, two of the founders of Blue Sky Studios, Barbara London who was then the Video Curator at the Museum of Modern Art and many other industry professionals. I worked very closely with them to help define our teaching philosophy in digital art. As the Art Director at Bray Studios in the late 1970s, I created animation, titles, and special effects for TV commercials and films using traditional compositing techniques with the Oxberry animation camera and optical printer, which was a time-consuming, exacting and expensive process. As technology advanced, so did our curriculum as we sought out new creative uses for emerging technology. One thing that never changes is the focus on creativity.

Our student body consisted of artists with a genuine curiosity of what creative potential the software and hardware held. One of our first graduates was John F. Simon, Jr. who has gone on to a fine art career and has exhibited his work internationally and is in the collections of the Museum of Modern Art, Guggenheim, and Whitney, among others. Carlos Saldanha studied 3D animation and was hired after graduation by Blue Sky Studios in 1993. Carlos has gone on to direct the Ice Age and Rio movies. In 2003, he was nominated for an Academy Award for Best Animated Short Film for Gone Nutty. Nancy Kato, class of 1991, recently celebrated her sixteenth year at Pixar Animation Studios.

For our 30th anniversary celebration, we are sharing their great success in a documentary, as well as reviewing the history of the department along with many other distinguished alumni interviews. The documentary will be released in early December.

In addition to the documentary, we are delighted to host a celebration along with an exhibition that takes place at the SVA Flatiron Gallery from October 22 to November 30. It showcases creative work from both early and recent graduates from concentrations in 3D and 2D animation, vfx, and fine art. The exhibition includes a digital sculpture installation by Jose Carlos Casado inspired by the Arctic connecting nature to technology, an animated LED light sculpture by Erwin Redl, and Alicia Martin’s animation of her digital paintings. We will also be showing our eight Student Academy Award-winning films and other notable animation shorts.

We hope to see you at our 30th Anniversary Celebration reception on October 28, 2016. Please visit our website at mfaca.sva.edu for more information.