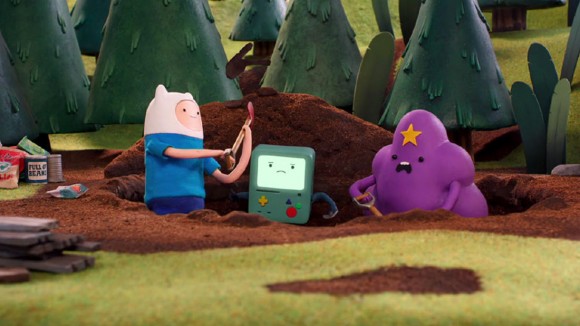 Adventure Time needed a long-awaited stop-motion episode, and a director.

It’s a long way from New Jersey, where the Los Angeles-based Lepore came up, before attending the Maryland Institute College of Art as well as CalArts, where Move Mountain helped make her name. “Put your films online, people!” Lepore told Cartoon Brew during a fun conversation about the tactile wonder of stop-motion, gender, and merit in animation, and why guest-directing Adventure Time is a resume-stuffer that’s pretty hard to beat.

Cartoon Brew: How does it feel to be a guest director on one of the most popular cartoons ever made?

Kirsten Lepore: Not gonna lie, it feels AWESOME. I’m a huge fan of Adventure Time, so it was an incredible honor to be chosen as a guest director. I got the gig a week after releasing my CalArts thesis, Move Mountain, online. Executive producer Adam Muto emailed saying he could’ve seen my 11-minute film as an episode of Adventure Time, that they’d been looking to do a stop-motion episode for awhile, and that he thought I was a good fit to guest-direct an episode. After I was done freaking out with excitement, I entered the long process of developing and writing “Bad Jubies.”

What can you tell us about the process of getting it made?

Kirsten Lepore: I finally pitched my boards and, to my relief, Cartoon Network was into it. We shopped it around to a few stop-motion studios, until we finally decided on Bix Pix, who were incredible to work with and so supportive throughout the process. They essentially handled all of the production — fabrication of puppets, building of sets and props, animation, post, and more. It was really exciting directing with a crew for the first time.

Adventure Time has been good with letting women direct and has regular women directors on staff, like Elizabeth Ito. What are your thoughts on women in animation, especially as directors? We’ve been covering the state of the industry in that regard, and it’s not pretty.

Kirsten Lepore: It’s my wish that the industry could be a meritocracy; the best person for the job gets the job. Obviously, we’ve found this is not always the case, and I think most of the problem stems from concepts about gender deeply rooted in the psyches of both men and women during their upbringing. It’s pretty difficult to make someone “unlearn” a bias with which they were raised.

That goes both ways; some women are raised not believing that they’re capable, so they don’t even attempt to gain expertise. I too am guilty of subtle, subconscious biases, but I do think that self-awareness is the key to change. Although I may possess a bias, I am aware of it, and therefore can consciously try to put it aside and police myself: Am I picking the best person for the job? Am I making assumptions?

Where do you feel Cartoon Network stands when it comes to gender equity?

Kirsten Lepore: Silver lining sidenote: I do feel that there is a pretty even gender balance at Cartoon Network, and Bix Pix, which is pretty cool. This may be another reason why it was such a pleasant experience working with both!

In terms of me being female, I’ve always lived my life like the human I want to be. I don’t know how I would be different if I were male, except that I’d have a different body. I have my upbringing to thank for this, but if I want to make something, I learn how and just do it. If someone discriminates against me, that’s a bummer, but it’s out of my control. It doesn’t change the fact that I’m still going to work hard, and make the things I want to make.

Speaking of, how about that stop motion? Going into awards season, Shaun the Sheep and Anomalisa were two of the best reviewed films of last year, in any art form.

Kirsten Lepore: I’m definitely excited about what Anomalisa is doing for the world of feature animation, specifically stop motion. Although I’ve happily made many children’s projects, I would like to see animation just as much considered to be for adults. In my opinion, the appeal of animation is that you’re able to limitlessly imagine and create.

Does stop motion not get enough credit for doing that?

Kirsten Lepore: I think stop motion only enhances the reality of an imagined world, since artists are creating physical objects that exist in life. There’s something special about the tactile quality and sheer craftsmanship, which is why “making-of” stop-motion videos are so appealing. I think audiences will always appreciate that type of meticulous artistry.