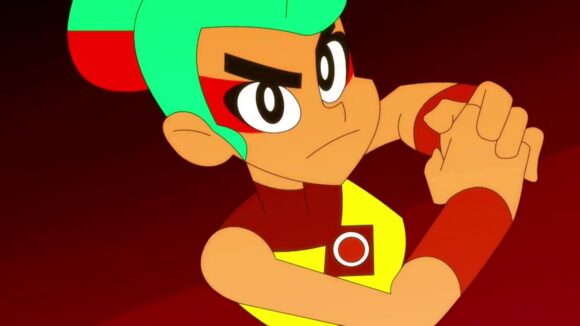 ¡Golpea duro, Hara! follows 15-year-old Hara, the only woman left in the world, who embarks on a journey with her friend Tesu to confront King Aquiles and prove she is the strongest individual alive. But in order to attain victory, Hara must learn to control the secret technique that sets her apart: the hard blows.

“We are very excited for adding ¡Golpea duro, Hara! to our multi-platform content and for the opportunity for our Chilean fans to enjoy it,” says Lucas Arechaga, Cartoon Network Latin America’s senior content manager. “The show presents an interesting and rich female lead, and it goes in line with the brand DNA, with a good balance between comedy and action, and the chances for existing as much in linear as in digital platforms.”

Founded by Bernardita Pastén and Matías Latorre, Marmota started producing original content for its Youtube channel in 2012. Their first series, Personas Cetáceas (Cetacean People), helped develop a community of fans that demanded more locally made animated stories. The show was eventually dubbed into English by Frederator and displayed in their online channel Cartoon Hangover, where it is known as Fin Punch.

Since then, Marmota has adopted a unique strategy of launching low-cost, self-financed pilots on Youtube to see which projects their online fans — currently numbering over 118,000 — respond to most strongly. The strategy has resulted in a variety of online series including Abuelo com, Nadki Mágico,, and Niño Surullo.

After signing with Hera Management company, Marmota Studios began pitching projects at international markets and festivals such as Annecy, MIP Junior, Rio Content Market, and Kidscreen. It was at the markets that they met Cartoon Network executives, who agreed to get on board as a distributor for ¡Golpea duro, Hara!, a project for which they had released a Youtube pilot in 2014.

Backed with funding from Chile’s National Council of Culture and the Arts and Hera Management, Marmota has finished production on the show’s first season comprised of eight 8-minute episodes. Golpea duro, Hara! premiered in December 2018 on Cartoon Network Latin America’s broadcast channel, as well as its Youtube channel.

“After six years creating original content for Youtube, this is a huge triumph,” says ¡Golpea duro, Hara! executive producer María Graciela Severino. “Being on Cartoon Network fills us with pride, especially because despite having no resources and applying to public funds and losing each time, our audience loved us and that keeps us motivated.”

Marmota is currently seeking co-production partners to produce a second season of ¡Golpea duro, Hara!, as well as other projects.