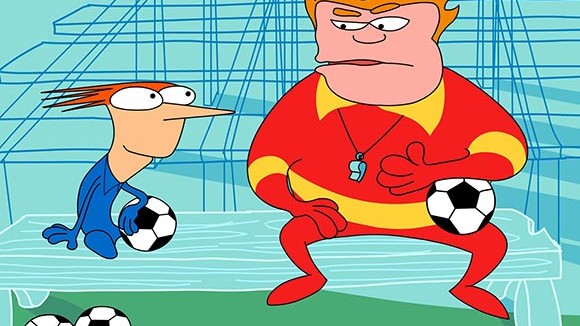 Soup2Nuts, the Boston animation studio best known for TV series like Home Movies, Dr. Katz: Professional Therapist, and WordGirl, has announced that it will cease operations at the end of this month.

Since 2001, when Soup2Nuts was acquired by children’s publisher Scholastic Inc., the studio has operated as an in-house production unit of Scholastic Media, which is “restructuring.”

“We are realigning some of the operations from Scholastic Media,” Kyle Good, senior vice president of corporate communications for Scholastic, told Boston Globe’s Betaboston. “We are restructuring that part of the business closer to our core businesses which are children’s publishing and education.

The studio was one of Boston’s largest; it had more than 60 employees as recently as six months ago, according to sources cited in Betaboston. As operations wind down, there are less than ten people currently working there.

Founded by Tom Snyder in 1993 as Tom Snyder Productions, the studio cemented its reputation on comedy-driven animation with its Comedy Central hit, Dr. Katz: Professional Therapist, which ran for six seasons, and Home Movies, which eventually ended up on Cartoon Network’s Adult Swim. Both series utilized Snyder’s quirky patented Squigglevision method of animation, although Home Movies switched to Flash production during its production.

Renamed Soup2Nuts in 1999, the studio was acquired by Scholastic in 2001, for whom it developed the multiple Daytime Emmy Award-winning PBS Kids educational series WordGirl.

The Boston Globe reports that the company had just completed work on seasons seven and eight of WordGirl and the first season of Astroblast for Sprout.

UPDATE: Dave Schlafman, co-founder of the studio CloudKid, has written a worth-reading blog post about the important role that Soup2Nuts played within the Boston animation community and why its loss is worth mourning:

The studio gave hope to young writers, animators, illustrators, filmmakers, and actors who weren’t ready to move west and endure the bottomless talent pool in LA. Will Shepard, longtime Soup writer and producer, once likened it to the “minor leagues” (in the best possible way). The studio was a place that gave bright-eyed grads a chance to learn new skills, gain experience, and most importantly build confidence. If you watch cartoons today, you’ll see the names of many Soup alumni in the credits of well-known animated shows such as Breadwinners, Looney Tunes, TRON: Legacy, Teen Titans Go!, Superjail!, Archer, and many many more.

The studio also helped launch the careers of successful writers, comedians, and creators. Loren Buchard (Bob’s Burgers), Brendon Small (Metalocalypse), and Jon Benjamin (Archer) all got their start at Soup. Many up and coming comedians such as Louis CK, Maria Bamford, and Eugene Mirman got some of their first TV credits because of this relatively unknown animation studio in Watertown, MA. In many ways, Soup2Nuts quietly influenced “adult animation” for generations to come.