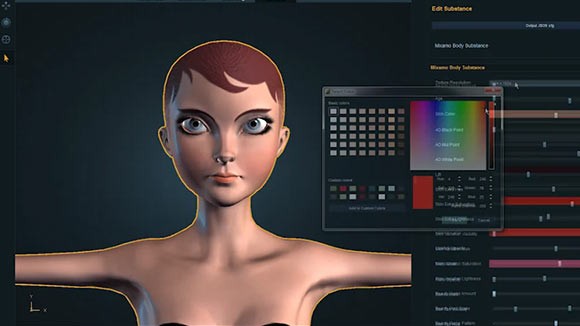 Designers need 3D skills, but still face obstacles obtaining and learning the tools and techniques of the trade. That’s where Mixamo comes in, according to Adobe, which acquired the seven-year-old San Francisco-based company earlier this week. Terms of the deal were not disclosed publicly.

Mixamo’s royalty-free customizable library includes thousands of production-quality 3D models that can be easily rigged and animated, and now they can easily be incorporated into a Photoshop CC workflow. This step-by-step guide illustrates how a piece like the one below can be created using the Mixamo/Photoshop workflow (there is no word yet whether Mixamo will be integrated into After Effects, which seems like a no-brainer):

Adobe’s acquisition of Mixamo is a reflection of the changing design world in which animation plays a much larger role in design fields. But even as 3D and animation is incorporated into more and more projects, CGI remains a walled garden inaccessible to many graphic designers.

Indeed, what helped Mixamo stand out from the crowd is its ability to put the power of modeling and animation into the hands of those without the extensive training and exclusive skills that currently dominate the 3D marketplace.

Strategically, Adobe’s buyout of Mixamo “fits in perfectly with their overall move from 2D to 3D,” Syracuse University professor Dan Pacheco — whose journalism students, most of whom have no 3D modeling experience, use Mixamo for scenes viewed in Oculus Rift VR headsets — told TechCrunch. “It could help broaden the base of designers working in experiential media to include more traditional designers who likely have no experience building 3D games.”

While free accounts are still available, according to Mixamo’s pricing FAQ, Adobe’s acquisition begins June 1, and most of Mixamo’s purchasing options will be phased out by the end of the year. Current subscribers can use their existing plans until they expire, and any plans that expire before the end of the year are immediately extended until December 31. After that, Mixamo’s service will likely be shuttered as it is fully integrated into Adobe’s Creative Cloud suite.