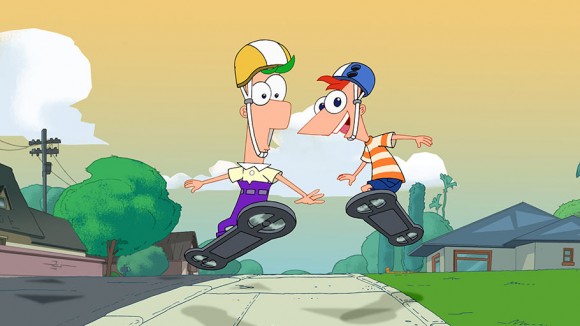 Disney XD has greenlit Mikey Murphy’s Law, from Dan Povenmire and Jeff “Swampy” Marsh, with a premiere slated for 2017. Phineas and Ferb producer and director Robert F. Hughes, writers Joshua Pruett, Dani Vetere, and Martin Olson, and story editor Scott Peterson will also be working on the series, which revolves around the character of Mikey Murphy, a fictional distant descendant of the Murphy of Murphy’s law fame.

Over a year ago, Cartoon Brew reported that production had wrapped on Phineas and Ferb, though there were as yet unseen episodes in the can. Today, Disney announced that the series finale, titled “Last Day of Summer,” will air on June 12, the culmination of a 126-episode run. Another standalone episode, the hour-long “The O.W.C.A. Files”, is set to premiere in fall, and will feature a song performed by “Footloose” soft rocker Kenny Loggins.

“Dan and Swampy are two of the most respected and proven show creators in the animation series business,” said Marc Buhaj, senior vice president of programming and general manager at Disney XD. “They are incredibly gifted storytellers who have a track record of creating smart, original and relatable characters that are universally appealing to both kids and families. It’s a coup for Disney XD to continue working with this talented duo on their latest creation Mikey Murphy’s Law. We’re looking forward to another great creative partnership.”