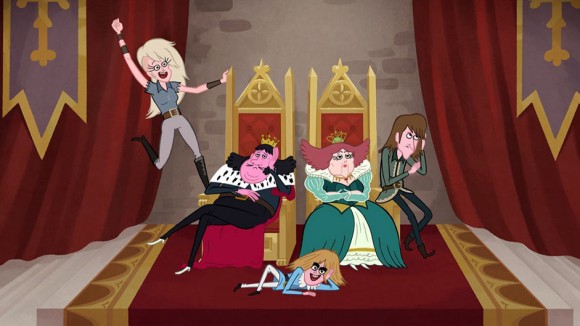 Regular Show supervising producer and writer Sean Szeles’ recent primetime Emmy has gone to his head. “I take it everywhere I go!” he told Cartoon Brew.

Lately, Szeles has taken it to his kingly spoof, Long Live the Royals, Cartoon Network’s second original miniseries following Patrick McHale’s decorated fantasy, Over the Garden Wall — which also recently scooped up an Emmy for outstanding animated program. No pressure!

“McHale is a genius, so to follow Over the Garden Wall was nerve-wracking,” Szeles explained. “It was always there to serve as a benchmark of sorts. I think it’s awesome Cartoon Network is fostering creative storytelling. I’m grateful to be a part of that.”

Szeles’ satirical riff on the royal theme springs from years growing up watching British television shows ranging from Fawlty Towers to Upstairs Downstairs. Their skewering of class and culture informs the “comfortable idiots” who pratfall into Long Live the Royals’ compromised social and political positions.

“I always found characters trying to be higher class than they are interesting and funny,” Szeles told Cartoon Brew. “The King and Queen are certainly comfortable idiots, but I think the kids aren’t so uptight about their roles in their society and humanize the family.”

They royal brood are still punks, though, and so are some of the cast, including Portlandia comedian (and ex-Trenchmouth drummer) Fred Armisen, who voices the princess’ boyfriend, Gavin, alongside a lineup including Jon Daly as cosmic goof King Rufus and Wendi McLendon-Covey as hand-fed layabout Queen Eleanor. As a rule, aristocratic spoofs demand upstart rebellions, no matter how comfortable they may be.

“Punks are great! I love their disenchanted attitudes and non-conforming conformity,” said Szeles. “Armisen was a blast; he’s brilliant at super-specific comedy. The rest of the cast are actors we sought out for specific roles.”

Szeles’ road from Regular Show to Long Live the Royals was a learned one, which is perhaps why Cartoon Network decided to give him the chance to follow, and contrast, McHale’s critically acclaimed miniseries. Having worked with directors like Dave Wasson, Jorge Gutierrez, and J. G. Quintel has taught him what it takes to make a show, Szeles said. “From season one as a writer and storyboard artist to working today on season eight as a supervising producer, Regular Show is the longest show I’ve worked on,” Szeles said. “I definitely couldn’t have made Long Live The Royals without those years of experience. TV schedules are so fast, and this one seemed even extra fast because we had a definitive air date we had to hit, so really there wasn’t much room for error.”

Aiming to keep Long Live the Royals error-free meant hiring Chris Tsirgiotis to pencil out most of the show’s background layouts on paper, while background layout artists Jim Alles and Clarke Snyder worked digitally in Photoshop, which art director Natalie Franscioni-Karp also used to paint keys. The show was animated traditionally on paper at Saerom Animation in Seoul, Korea.

“Working all those years taught me to have a definitive vision; you can’t be wishy-washy with your decision-making,” he added. “But you also have to be open to new things that pop up, and input from artists you hire to help you make it. It’s a crazy balance.”

The four-episode Long Live the Royals miniseries premieres this week, Monday through Thursday, on Cartoon Network.