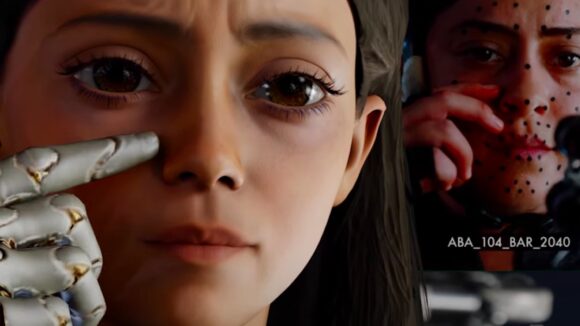 With Alita: Battle Angel back in U.S. cinemas, Weta Digital has marked the re-release by releasing five short breakdowns of its animation and vfx.

The sci-fi feature is a brilliant technical achievement — that’s one thing the otherwise mixed reviews agreed on when the film, which is directed by Robert Rodriguez and co-produced by James Cameron, came out last year. Its greatest innovation is its extensive use of motion capture to create the cg-animated title character, an amnesiac cyborg adrift in the dystopian Iron City, around Rosa Salazar’s performance.

Weta led the animation and vfx (with DNEG and Framestore also involved). The studio’s breakdowns focus respectively on cinematography, compositing, the Iron City, and Alita herself, with the fifth serving as a kind of summary. Watch them all below.

Although short, the videos are detailed and informative. We learn how the compositors finessed the moments of subtle physical contact between human actors and digital characters, and how the animators drew inspiration from the source manga, Yukito Kishiro’s Gunnm, when posing.

We see that Iron City, far from being a wholly digital creation, is in fact an extension of a vast backlot in Texas. The environment’s warm colors were modeled on Havana, Cuba, so as to avoid “a stereotypical dystopian gray.” Most interestingly, we’re shown some of the process of modeling the intricate photoreal character at the center of the film. The work on Alita is the high-water mark of performance capture — at least until Cameron’s Avatar 2 comes out.